Mister Babadook (simply known as the Babadook) is the titular main antagonist of the 2014 Australian horror/thriller film of the same name. It is a supernatural creature who haunted Amelia and her son, Samuel.

The Babadook most generally appears as a towering, shadowy bogeyman wearing a black coat and hat, with long, claw-like hands and a pale frightening face. The Babadook haunts whomever reads its poem and hides inside a pop-up book that mysteriously appears in random homes. As its prey becomes more frightened, the Babadook becomes more monstrous. When single mother Amelia reads the book to Samuel, both she and her son become increasingly paranoid.

The Babadook's presence pushes Amelia to the brink of insanity. She develops a sleeping disorder and keeps both Samuel and herself inside the house for days on end. Eventually, the Babadook takes over Amelia's mind and forces her to kill their dog, fulfilling its prophecy. Amelia is about to kill Samuel, but he manages to trap her and tie her down. She then barfs a very gross red substance. The Babadook is rejected from Amelia and tries attacking Samuel, but is backed into a corner by his mother. As Amelia faces the fiend, she has a vision of her late husband, whose death she has been in denial about ever since Samuel was born. Finding the courage to face her inner demons, Amelia stands up to the Babadook, shouting that she will kill it if it tries to harm Samuel. Defeated, the Babadook then collapses in front of her, revealed to be nothing but a hat and trenchcoat. As Amelia reaches for it, the clothes rise as the shrieking Babadook rushes out of the room and locks itself inside the basement, where all of her husband's possessions are.

Ever since her husband died, Amelia has been avoiding the issue to the point where she barely acknowledges his existence, this has caused her to distance herself from anyone who tries to talk to her about it, which leaves her isolated except for her son. Whenever Amelia tries to ignore or get rid of it, the Babadook comes back even scarier than before. 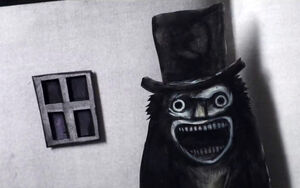 Babadook's illustration in his book 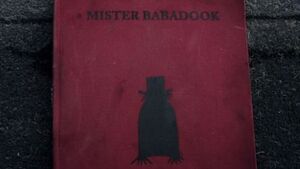 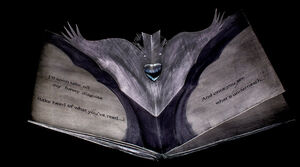 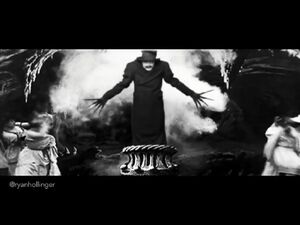 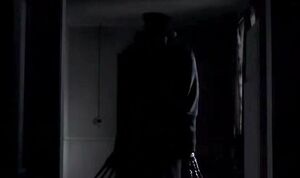 Babadook in the shadows
Add a photo to this gallery 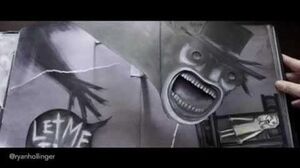