Kill any who are close to his summoner.

Sow chaos and distrust across the townsfolk.
Expand his demonic influence.

Mister Chuckle Teeth is the main antagonist of the X-Files episode "Familiar" of the 2016 revival series. He is one of the show's newest Monsters of the Week and gaining popularity due to its horrific appearance and the tone of the episode being much more in-keeping with the darker elements of the older X-Files over the more comedy-centric stories that followed it.

He was portrayed by Keith Arbuthnot.

Andrew would continue to follow Mister Chuckle Teeth deeper into the forest unaware that his "friend" was luring him to a shocking and violent death. Being mauled to death by supernatural forces Andrew's death spread fear and discontent in the small town, as well as caused Agents Mulder and Scully to arrive to investigate the mysterious events, leading to a bizarre case of witchcraft and more appearances of Mister Chuckle Teeth (as well as other demonic beings such as a hellhound and a demonic "telletubby" creature who resembles to the original one) - all connected to a larger threat.

Ultimately, it is revealed that Mister Chuckle Teeth is a demon, alongside all the other strange entities, summoned as part of a curse by a witch to extract revenge on her husband for cheating on her. However, the curse backfired and thus caused the demons to target those she loved rather than her original targets.

Soon the list of victims dramatically piles up as Chuckle Teeth kills Anna's own daughter, incites the townspeople into lynching a sex offender, tricks the Chief into killing Andrew's father (after invading his home), driving Andrew's mother (Diana) off the road via mimicking Andrew, then killing her. His final confirmed victim would be the Chief himself, who was murdered moments after learning that his wife was the witch responsible for all the horror in the town.

Despite his status as a child's mascot, Mister Chuckle Teeth is a frightening figure dressed in a tuxedo and having a large head similar to that of a dummy, with strange eyes and a large toothy grin.

He is black and white, safe for a large red bow tie, hearkening back to the early days of animation and never speaks, moving in whimsical mannerisms that while seemingly beloved by his audience is unsettling and sinister.

As a demon, Mister Chuckle Teeth is not limited by our perceptions of reality and can take any number of forms, such as "Biggle Tiggles", a teletubby like mascot from the same show as Chuckle Teeth, he could also appear as a large and intimidating black wolf-dog.

Chuckle Teeth could also take the form of other humans, even deceased victims, so as to incite panic and fear - such as when he took the form of Andrew to drive Diana off the road.

Mister Chuckle Teeth was a powerful and malevolent Satanic demon, claiming to originate from Hell - as such it had a vast array of powers and only a small sample of its true abilities were displayed but included such phenomena as: 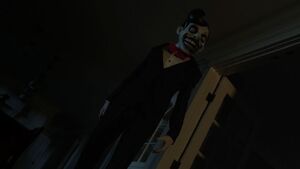 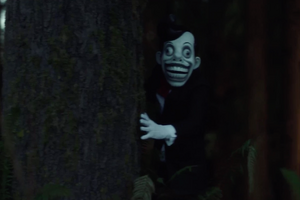 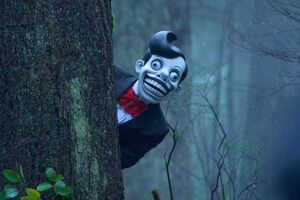 Mr. Chuckle Teeth gets closer to the viewers and unleashes his true nature. 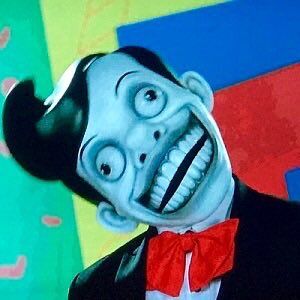 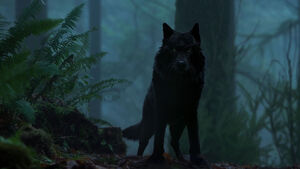 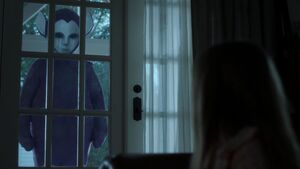 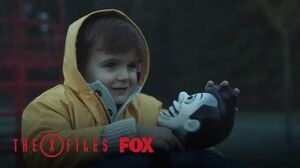 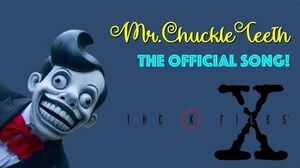