Unknown (claimed to be a pianist, likely false)

Charisma
Vampirism via mouths on his palms

Socializing with victims before killing and mutilating them.

Kill and feed on others (succeeded).

Mister Gamin is a villain who appeared in the 1952 comic, Mystic, published by Atlas, which would later become the more famous Marvel comics we know today : as with all characters of the "pre-Fantastic Four" era he existed in a time before Marvel adapted a shared universe and thus stories were told in the same manner as shorts such as Tales From The Crypt, Creep Show or the Twilight Zone.

Mister Gamin was a seemingly kind gentleman but held a dark secret, being the true face behind a serial-killer the public had come to know as the "Mad Killer", who left victims with mutilated necks.

Mister Gamin would kill four victims in such a manner before he is seen finishing off his fifth, a vagrant sleeping in a subway, after doing the grisly deed he returned to his boarding home via a cab just as morning broke.

Unknown to him was that the owner of the boarding house, Harry Dobbs, grew suspicious of the strange behaviors Mister Gamin displayed, such as leaving all night, only returning at dawn and his constant wearing of gloves. However, his wife scolded him for such accusations, reminding him that Mister Gamin had explained he was a pianist and wore the gloves to protect his hands and that Gamin had always been a gentleman to her.

Despite this Dobbs was still suspicious of Gamin, when Mister Gamin declared that he would have to leave town to deal with "unfinished business" Dobbs was quick to enter Mister Gamin's dwelling to search for incriminating evidence, which he unfortunately found in the form of numerous gloves, some covered in blood.

Dobbs headed to leave only to be blocked by Mister Gamin, who revealed he had simply went for a short walk and that Dobbs was his "unfinished business", Dobbs desperately tried to warn Gamin that he would be punished for his crimes but the killer simply mocked Dobbs, stating he would move to another city and then proceeded to strangle and feed on Dobbs, his fifth victim.

What happens next is left to the imagination but it is assumed Mister Gamin continued his murder spree and with very few superheroes or villains in that era to stop him Mister Gamin likely succeeded in his crimes for many years following.

Mister Gamin is an intelligent and cunning predator who guises himself as a kind gentleman but is in reality a deadly monster that hides a pair of ravenous mouths on the palm of his hands - he keeps them hidden via gloves but will remove said gloves when he attacks a victim, strangling them while also feeding on their blood via the mouths : the victims' throats were left horrifically mutilated after such feeding. 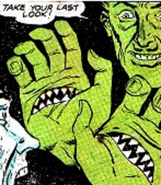 Retrieved from "https://villains.fandom.com/wiki/Mister_Gamin?oldid=3557574"
Community content is available under CC-BY-SA unless otherwise noted.