Take control of the world.

Kill Cloak and Dagger, and any other superhero he faces.
Gain as much power as possible (all failed).

Power-Hungry Sorcerer
Mister Jip is a supervillain from the Marvel comics who has faced Cloak and Dagger and the X-Men, as well as several other superheroes. He is a power-hungry parasitic entity that uses others to prolong his own life, despite being mutated into a hideous monster as a result.

Mister Jip was born in the 15th century somewhere in the Far East, under another name. At an early age, he left home to seek out as much knowledge as he could possibly learn. He heard of an enlightened city called Kamar Taj, somewhere in the Himalayas. When he finally reached the city, he found nothing but hulking ruins. Saddened by the lost chance to gain more knowledge, he laid down and cried. The last citizen of the city heard him, and thought he was weeping over the dead city. The citizen, who would someday become the sorcerer supreme known as the Ancient One, took Jip on as his first student.

Jip studied under the Ancient One for many years, until he was caught studying some books of dark magic. The Ancient One banished Jip, but allowed him to live. Jip continued his studies, but he was worried because he couldn't live long enough to learn as much as he wanted to. He learned how to continue his life span by usurping the bodies of others. Unfortunately, he can only usurp the bodies of evil people, and the body decays at a rapid rate.

He created the bizarre creature, Yipyap, to seek out evil people for him to usurp. Jip lived for many years in this manner, usurping body after body. In more recent years, Jip had created agents for him, called Night and Day.

At one point, Yip Yap found the hero known as Cloak and the darkness he contained. Jip planned to usurp Cloak's body, but Dagger suddenly learned how to keep Cloak's darkness at bay with her light powers. But Cloak feared that now that he was normal, Dagger wouldn't care for him as much as she had when he had been Cloak. Jip realized this and set up a curio shop in the neighborhood where Cloak and Dagger lived.

Jip helped various people in the neighborhood, seeming to provide miracles for them. The desperate Cloak, hearing about the miracles the shop provided, entered Jip's shop for help. Jip, in the guise of a middle-aged shopkeeper, gave him a black cube in return for future services. A despondent Cloak eventually gave in to temptation and took the black cube, turning him back into Cloak. Jip knew that Dagger would leave Cloak if he accepted his powers again.

Dagger did leave at first, but she returned just in time to find Jip in the process of usurping Cloak's body. Dagger defended Cloak and defeated Jip's agents, Night and Day. The battle caused the being known as the Predator to exit through Cloak, and attacked Day. The Predator scared Jip so bad that he fled.

Later, Jip contacted Cloak, telling Cloak that he still owed him for giving him his powers back to him. He told Cloak to take Dagger to a certain spot and leave her, and then return to Jip. Cloak agreed, planning to trick Jip. Cloak teleported Dagger to what he thought was a safe spot. In actuality, when he had tried to usurp Cloak's body, Jip had planted mental suggestions in Cloak's mind.

These suggestions caused Cloak to leave Dagger at a spot where Night was waiting. When Cloak returned to Jip, Jip used a magic spell to stop him from going to rescue Dagger. Jip formed a scrying screen so that Cloak could watch helplessly while Night attacked Dagger. Jip then left Cloak alone to suffer while he went back to his studies. Cloak eventually escaped Jip's mystic bonds, thanks to the help of a child sorcerer and the child's father.

Meanwhile, Night had caused Dagger to become evil. Luckily, the original mutant hero team X-Factor intervened, stopping Dagger and turning her back to normal. Night disappeared before she could be apprehended.

Mr. Jip has vowed to gain his vengeance on Cloak and Dagger. Recently, Jip has gained control over Xavier Delgado, a former priest who had become friends with Dagger. Delgado had at the time only recently been released from an insane asylum.

Mister Jip later bargained with Doctor Doom to trade Dagger for a book of black magic in Doom's possession. As Delgado, he murdered Father Michael Bowen, Dagger's uncle, and in disguise accompanied Dagger to Latveria. Jip's attempt to deliver Dagger to Doctor Doom was foiled by Cloak, Night, Brigid O'Reilly and "Rusty" Nales. Jip restored Dagger's sight, but was seemingly destroyed by a "bullet of living darkness" formed by Night and fired by Rusty.

In the Ultimate Marvel Comics imprint, a more human looking Mister Jip appears in the pages of All-New Ultimates. He is in the profession of selling narcotics and is shown working with King Cobra and Crossbones. He answers to the supervillain Ecstasy and begins displaying side-effects to the narcotics due to long-term exposure to them. After Crossbones barges into a meeting demanding payment, Jip suddenly transforms into a large, terrifying, purple monstrosity and attempts to kill him and Ecstasy, but is thwarted by the New Ultimates and Terror Inc. Eventually, Bombshell creates an opening within him and Terror enters and heads to Jip's heart. Terror feeds energy to Jip ending his suffering and melting him into a pool of flesh. 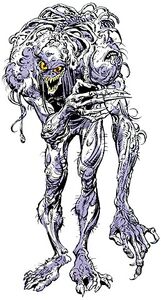