Leader of the Monster Society of Evil

Mister Mind is a villain in DC Comics, serving as one of the archenemies of Captain Marvel/Shazam, as well as an enemy of Booster Gold, the Justice League and a number of other heroes.

While his origins vary between versions, in all he is portrayed as a telepathic worm-like creature who seeks to destroy the Marvel Family and take over the universe. He is also often depicted as the leader and founder of the Monster Society of Evil.

Although each member of the Marvel family has their own individual archenemy, Mister Mind holds the title of being the archenemy to the family as a whole. And has proven on multiple occasions, that despite his diminutive size and cartoony look, he is truly their most evil and dangerous opponent. He serves as one of the main antagonists of the SHAZAM! franchise (aside from Doctor Sivana). He served as the main antagonist of Booster Gold's 52 story arc and Captain Marvel story arcs that both involve and not involve the Monster Society of Evil.

Mister Mind claims to be the world’s wickedest worm. He claims that he and his species came from Venus and that his species ruled all of the Earth in between the extinction of the dinosaurs and the very first first Ice Age. He wants to take control all over the world. But so far his plans have been failures. Many of his plans are motivated also by getting revenge on the Marvel family for foiling his initial plan, and in the process he's killed untold hundreds.

Mister Mind appears in the 2019 film Shazam!, set in the DCEU. He is first seen trapped in a jar in the Rock of Eternity, imprisoned by the wizard Shazam. The jar is later seen smashed, with Mister Mind missing.

Mister Mind appears in the post-credit scene, approaching Thaddeus Sivana in his prison cell, seeking an alliance. Mister Mind is likely to return for the sequel, possibly as the main antagonist.

Mr. Mind appeared in The Kid Super Power Hour With Shazam! cartoon. In one episode, he is strangely stricken with an inferiority complex as bigger villains never take him seriously, despite his historical ability to organize and direct villains far more powerful than himself.  It can be inferred that this Mr. Mind is prejudiced against all life forms bigger than he is, and he wants to vanquish them simply because he fears being stepped on or eaten by them.

In the episode "The Malicious Mister Mind", Mind convinces the Monster Society of Evil to make him their leader which they do after a vote. He later had the society steal parts for a death ray he is constructing. He manages to defeat the Marvel's by making them turn on each other through mind control. When he finishes the death ray Doctor Sivana turns on him and uses the ray on Mind. However he reveals that it is really a growth ray which turns him into a giant monster. The Marvel Family joins forces to fight him but he defeats them. Batman then leads him back to the rays, turns it to reverse, and reverts him back to original size.

Mr. Mind appears in Justice League Action episode "Follow That Space Cab,". He is depicted as wearing a radio around his neck that he uses to talk. He is on the run from a debt to a space crime lord named Boss Kack. Superman already had him in custody while avoiding Lobo and receives help in getting away by Space Cabbie. During a fight between Lobo, Hawkman, and Superman, Mr. Mind gets out of his containment and is lured out of the engine by Space Cabbie wanting a picture of him. After exiting Space Cabbie's space cab, Mr. Mind ends up near where Superman and Hawkman were fighting Lobo. Lobo accidentally steps on Mind, squashing him. Reasoning that there's enough of his body to collect the bounty from Boss Kack, Lobo wipes his remains off his boot and cheerfully takes his leave without realizing that Mind had the ability to regenerate. Mr. Mind's remains are taken into captivity and Mr. Mind regenerates inside a prison cell within the Justice League Watchtower.

Mister Mind is one of Earth’s most formidable telepaths. He is able to take control of an individual’s mind. He also possessed many insect-related abilities, like the ability to spin very strong silk at speeds faster than the eye can see, so quickly he can encase a human in a cocoon within seconds.

Apparently very long-lived, Mister Mind's current body is only the larval stage of his breed: during the 52 miniseries he briefly reaches maturity, becoming a Hyperfly with increased time- and space-bending abilities, feeding over the timelines of singular universes. By this ability, he is able to transform the 52, exactly identical, universes of the current DCU Multiverse into vastly different worlds, literally eating away portions of their history. 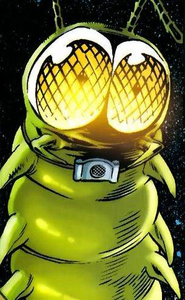 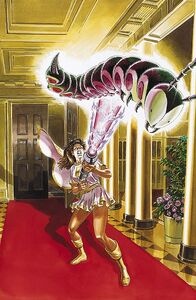 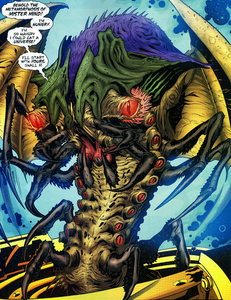 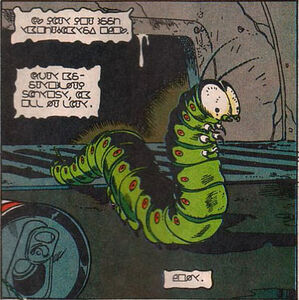 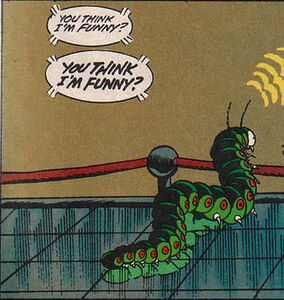 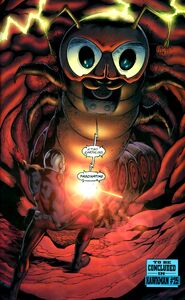 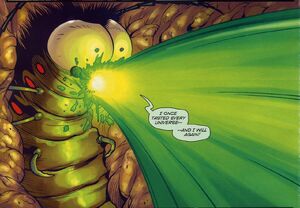 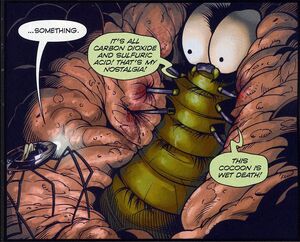 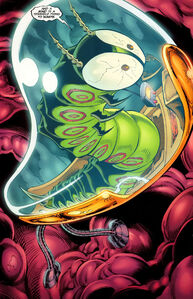 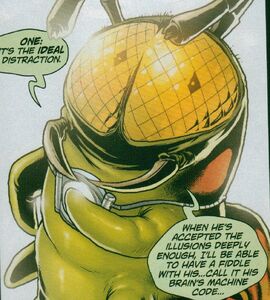 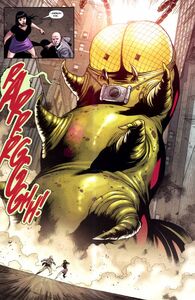 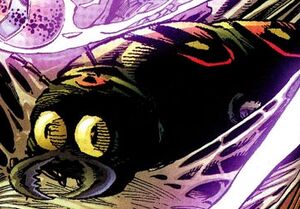 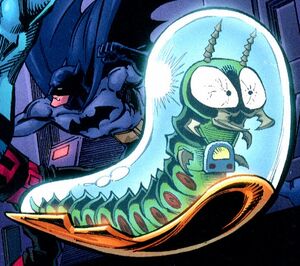 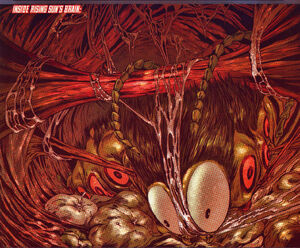 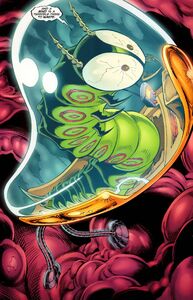 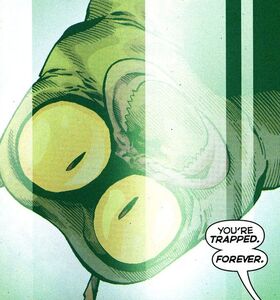 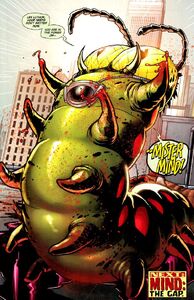 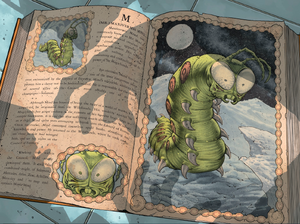 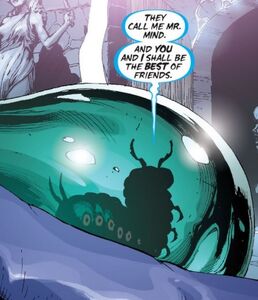 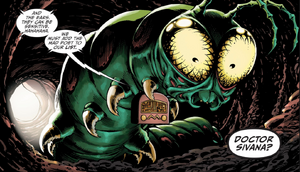 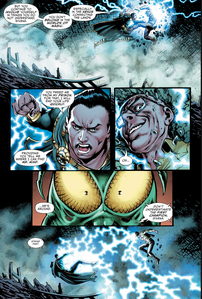 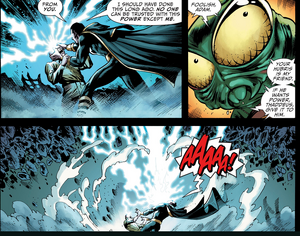 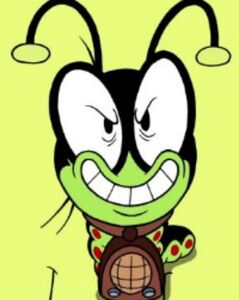 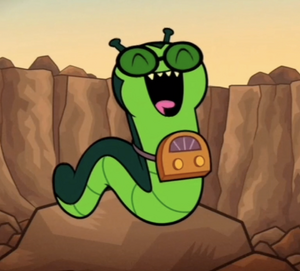 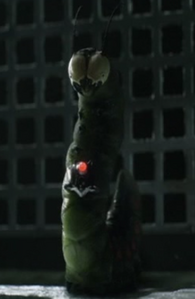 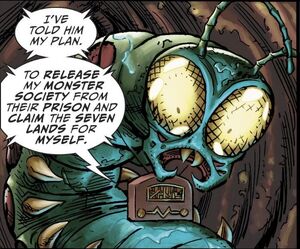 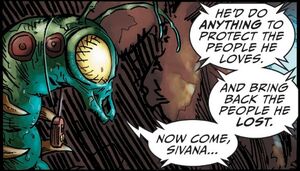