Annoying people for his own entertainment (mostly Superman).

Avoid being fooled by Superman while tricking him.

Omnipotent Trickster
Mister Mxyzptlk is an antagonist of Superman comics and media. He is a classic example of a trickster villain, as unlike many of Superman's enemies, he does not seek conquest or ruin. Rather, he just wants to mess with Superman for amusement as well as teach lessons to others, albeit in the manner of a trickster-god. He served as the main antagonist in What Ever Happened To The Man Of Tomorrow and Supergirl: Cosmic Adventures in the 8th Grade.

In the TV show Superboy, he was played by the late Michael J. Pollard. In Superman: The Animated Series, he was voiced by Gilbert Gottfried, who also voices Iago from Disney's Aladdin.

Mister Mxyzptlk is a trouble-making imp from the Fifth Dimension who has been harassing Superman since the early days for no reason other than boredom and slight malice - his actions often get him arrested and set to trial in his own dimension but he continues to return since punishment doesn't really affect a being like Mxyzptlk - who can just as easily escape any imprisonment or sentence he may have had imposed on himself.

Superman first met Mxyzptlk when he appeared in Metropolis as the charismatic Ben DeRoy. Mr. Mxyzptlk once forced Superman and The Flash (Wally West) into a race that The Flash won. Mr. Mxyzptlk encountered Lex Luthor and learned the concept of how to lie. Later, Mr. Mxyzptlk supplied Luthor with red kryptonite which made Superman's powers disappear, but Luthor violated Mr. Mxyzptlk's conditions and so Superman regained his powers. Mxyzptlk appeared in Metropolis and tried granting a wish to everybody in the city. He even tried, albeit unsuccessful at the time, to reunite Superman and Lois Lane.

There is a time when even a trickster is out-tricked. Mxyzptlk paid a visit to the insane Clown Prince of Crime, The Joker, at his cell in Arkham Asylum. He toyed with the notion of setting the Joker free with 1% of his power and watch Superman and Batman dance to his tune. Smarter than he may have seemed to Mxyzptlk, the Joker tricked Mxyzptlk into revealing his imp name and gained power over him. He took 99% of Mxzyptlk's power and used it to proclaim himself Emperor of a world he reshaped in his image. Superman, finding the flaw in his twisted logic realized that to the Joker, his existence is nothing without Batman. He couldn't even erase his own memories of the Dark Knight and therefore his reality was thwarted and Mxyzptlk was able to reign his powers back in and return to the 5th Dimension

Mxy has done many other things and he got bored of tormenting humans and other beings weaker than him, so when he found Superman, he was thrilled.

Mxyzptlk is a virtually omnipotent reality warper due to extremely advanced "Super-Science" that works like magic, allowing him to perform virtually anything imaginable - though he has not killed Superman and has a weakness in the form of whenever someone tricks him into speaking his name backwards he will be banished to the Fifth Dimension for a short while (though this weakness is only valid if Myx allows it (in other words he has control over his own weaknesses, showing that he is even more powerful than he lets himself be seen, likely deliberately lowering his powers for sheer "fun".)

A mischievous being from another dimension, Mr. Mxyzptlk possesses powers so advanced they can only be described as magic, which makes him a dangerous foe for Superman, as Superman's invulnerability doesn't work on magical attacks, meaning Mxyzptylk's attacks can actually hurt Superman. He's a prankster, a troublemaker and a genuine threat. He knows Superman's double identity but would never tell, fearing it would lessen the control he'd have over the Man of Steel. Besides, threatening to reveal Superman's secret is much more fun than actually doing it. If he wanted to, Mxyzptlk could kill Superman outright by simply rearranging the Man of Steel's molecules, but again, where is the fun in that? In some weird way, Mr. Mxyzptlk considers himself Superman's "pal", always showing up when least expected to throw a surprise into "the big boy scout's" life. Mxy thinks Superman actually looks forward to their running duel of wits as much as he does. Boy, is he wrong. When Mxy's not out trying to destroy Superman, he goes home to the 5th dimension where he enjoys long walks in the park, rock climbing and snuggling with his main squeeze Gsptlsnz.

Mister Mxyzptlk's powers have been confirmed for some time now to come from imagination itself, which is in turn connected to a concept in DC known as the Collective Consciousness - in short Myx has as much power as he (or those around him) imagines.

Myx is not, however, completely invincible and is below the level of beings who scale to the Over-Void, such as Mandrakk or other Monitors, he is also significantly below Perpetua. 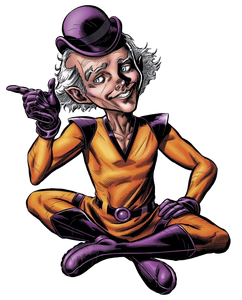 Mxy in the 1960's Superman cartoon 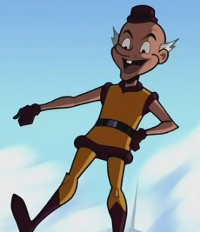 Mxy in Batman: The Brave and the Bold 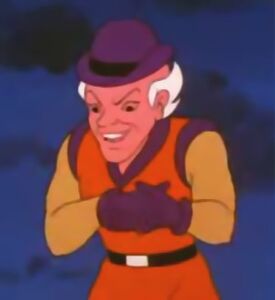 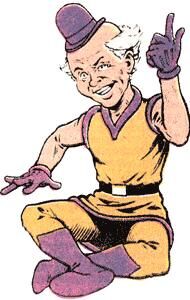 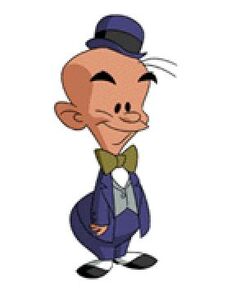 Mxy in Superman: The Animated Series

Mxy in Lois& Clark: The New Adventures of Superman 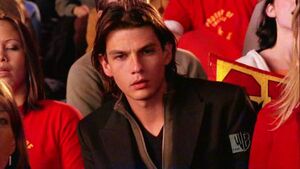 Mxy as he appears in Smallville 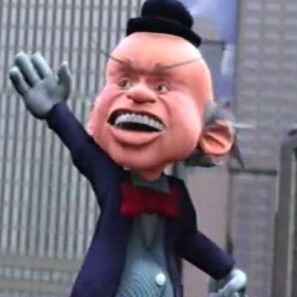 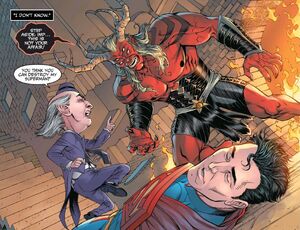 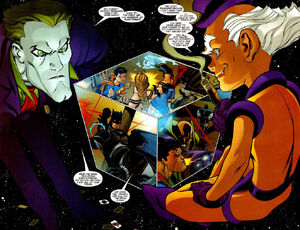 Mxyzptlk explains to Joker his power over reality 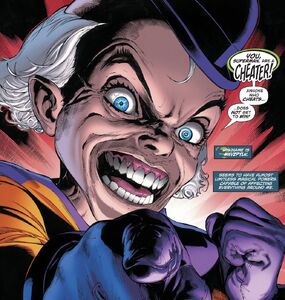 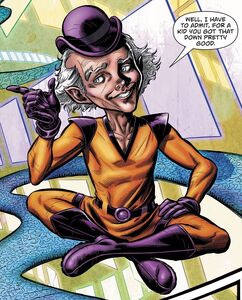 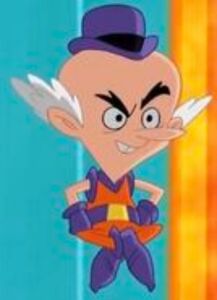 Mxy as he appears in Justice League Action 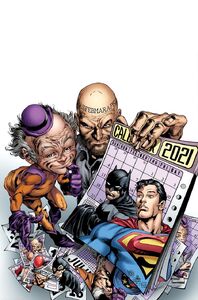