Supervillain
Cult leader
Leader of the Brotherhood of Dada

Mister Nobody (real name: Eric Morden) is a supervillain in DC Comics. He is notable for his insanity and nihilism, created as an enemy of the Doom Patrol he has led two supervillain groups, both of which he would ultimately abandon true to his ideology of spreading chaos for the sake of chaos, truly believing that life has no reason or purpose,

To him even the idea of "good" and "evil" are laughable and thus he has no qualms about performing unspeakable acts if the whim suits him, up to and including attempts to destroy reality itself.

Eric Morden was just another underling under the orders of the Brain in the Brotherhood of Evil, essentially a grunt, tasked with a device called the White Room, which could drain the sanity from other humans. The experience also convinced him the universe was "a drooling idiot with no fashion sense". Calling himself Mister Nobody he organized the rebirth of a Brotherhood that shared his ideals. Because of this, he chose to initiate the Brotherhood of Dada, a group of lunatics that followed Morden's ideas to change the world.

Mister Nobody stole lysergic resonance to power his own presidential campaign in the U.S.A. . The U.S. government sent a similarly insane agent, John Dandy. Morden faded to nothingness after the attack.

However, he has resurfaced in the Trinity series, as a candidate for the Dark Arcana's The Fool and as a part of the Final Battle for the Arcana in Metropolis.

Mr Nobody has a unique physiology which is disorientating for others to observe. Due to his physiology he appears to be invulnerable, and may be immortal. He also possesses largely unexplained psychic abilities, as he has demonstrated the ability to enter dreams, as well as to locate individuals and know everything about them before they meet. He is also capable of possessing people, who appear to remain fully aware of his behaviour while he inhabits their bodies. He is very intelligent, and a competent leader. 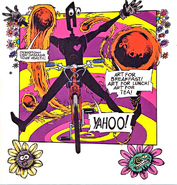 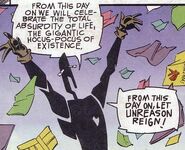 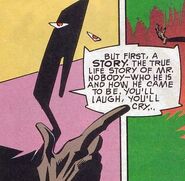 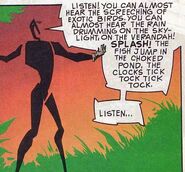 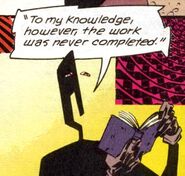 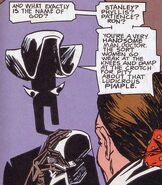 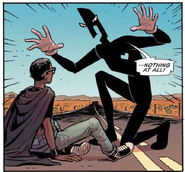 Retrieved from "https://villains.fandom.com/wiki/Mister_Nobody?oldid=4317393"
Community content is available under CC-BY-SA unless otherwise noted.