Torturing other Dream Demons before finishing them off.

Execute Mr. Ijima's orders by implanting other Dream Demons into humans, then slaughtering them to destroy the respective people's dreams (succeeded for a while, but ultimately failed).

Kill Merry and those who are standing in her way (initially succeeded, but then failed).

Mistleteinn is a malevolent and vicious Dream Demon who appears as an anime-exclusive villain in the animated adaptation of Dream Eater Merry (or Yumekui Meri in Japanese version). She has the power to force Dream Demons into human vessels, later targeting and killing them, resulting in the vessel losing all ambition in their goals. She is extremely strong, as it is noted that she is acknowledged by Pharos Hercules for her power.

She was voiced by Sayuri Yahagi in the Japanese version, and Monica Rial in the English version. The latter is known for lending a voice to some villains such as Rize Kamishiro, Dante (FMA 2003) in her Lyra form, Sayara Yamanobe and Umihebi.

Mistleteinn has light skin, long white hair with a red crown of vines, teal eyes with a pupil in the shape of a vine with leaves. She wears a dress that appears to be made of red and black plants. She has two vines at her back, that she used to trap and stab her opponents.

Despite having the outward appearance of a sweet little girl, Mistleteinn is a vicious, monstrous and intelligent sadist. She is playful in the sense that she enjoys toying with her victims, almost as if she was purposely proving that she is a lot stronger and better than her victims before killing them.

Mistleteinn appears to be sustained by killing other Dream Demons as she hopes that their deaths will fill her stomach. In light of this, she does not feel guilt upon destroying a child's dreams and ambitions; in fact, her facial expressions and outbursts indicate that she is aware of what she is doing and enjoys it, further highlighting her sadistic tendencies. In spite of displayed savagery, she has a cowardly side as she was willing to use dirty tricks to prevent her enemies from attacking her (as seen in the final episode when she swallowed Parade and used her as a hostage in order to discourage Merry and Engi from attacking her).

Mistleteinn does form a bit of a relationship with the equally sadistic Ryota Ijima. But the relationship that they have is pretty much limited to them praising and admiring each other's sadism. Other than that, she rarely interacts with Ryota that much, and only Ryota shows a bit of a care towards her when she got shot by Chizuru and Lestion.

Mistleteinn is a Dream Demon who was born in the land of nightmares, and loved to kill Dream Demons more than anything. This was evidenced in Lestion's flashback where she engages in a battle against most of Lestion's companions, who were trying to destroy her; she quickly found it boring due to her superior abilities before proceeding to slaughter all of them. When she arrived in the real world, she met Ijima, who wished to crush peoples dreams and goals. He then became her vessel and the two became compatible. Ijima conjured up a twisted plan with Mistleteinn forcing Dream Demons into his students when his students told what they wanted to do with her life. Mistleteinn then happily executes Ijima's twisted orders, destroying the Dream Demons and therefore, destroying the turning student's dreams, reducing them to almost lifeless, empty shells.

When Mistleteinn forced Parade into Isana with the intent of doing the same to her, sometime later, she forced them both into her daydream. At first, she tried to get Parade out of hiding by imprisoning a confused Isana into a globe of water, hoping that by nearly drowning her, Parade would come out to save her. However, he still did not come out. She then, growing bored of waiting, released Isana, who fell into unconsciousness, and went to look for Parade. Her attempt was stopped when Merry and Yumeji entered her daydream. Mistleteinn taunted Merry, such as wearing her hat and asking cruelly if her head really was as big as her hat. After this, she then proceeds to beat Merry and was about to destroy Parade by wrapping him up in chains, and places him near Isana's heart with the intention of piercing them simultaneously. However, Chizuru stepped in to stop Mistleteinn and said that she would protect Isana and her dreams no matter what, due to forming a bond with her. Mistleteinn then grew bored and said she'd let them go until next time with the promise to kill every one of them.

In the next and final battle, everyone entered Engi's daydream as their battleground. She mocked Engi about her garden and then changes the landscape to suit her own image, and dodged every attack that Engi threw before piercing her in her hip-area with a large thorn she had killed many Dream Demons with, leaving Engi unable to battle. Lestion then sacrificed himself to make the final bullet for his gun to kill Mistleteinn and had Chizuru fire it, leaving her empty of dreams and everything in her heart. However, even though it was a direct hit, she still did not die, and mocked the emotionless and empty Chizuru about the bullet that did not bear the promised fruit. Because of this, Merry tried to fight Mistleteinn, but her attempt was stopped when Mistleteinn trapped Merry in a white rosebud called "The Bud of Despair", hoping Merry would be destroyed by her own sorrow the bud would force her to remember.

Yumeji then started to try and fight her with John Doe's Guiltion-like saw. And despite being mortally injured by Mistleteinn, he still kept fighting, planting a bit of fear into her, wondering what made him so strong. This is where Mistleteinn was shown to be a weak Dream Demon in a sense, because the strength in the dream world isn't in one's body, but their heart. Merry remembered Yumeji's words to bring her back home, so she destroyed The Bud of Despair that imprisoned her, and was now ready to fight with Engi, who was now fully recovered from the strength of her heart.

In the last ditch effort to beat the two dream-demons, Mistleteinn swallowed Parade and taunts the two regarding what they were going to do now that her friend's dreams were in her belly. However, Merry had newly found confidence from Yumeji, so she slammed her hand onto Mistleteinn's chest, where half of her body disintegrated right were Leon's bullet had hit, proving his and Chizuru's sacrifice was not in vain. Parade then jumped out from her torn stomach, resulting in an immense amount of pain for Mistleteinn. He jumped into Merry's arms and thanked her for saving him before she sent him back to the dream word.

Mistleteinn, now injured, was afraid and asked Merry who was she and how she could easily beat her. Merry responded by saying that "she was the Dream Demon that swallowed up nasty nightmares like her" before punching her harshly in her right cheek and saying that she was Dream Eater Merry. Mistleteinn only had seconds to see Engi coming to her, before she was sliced in half by Engi's sword, disappearing in red vines leaves.

Unlike other Dream Demons, Mistleteinn has been described, by Lestion, as being formed by negative emotions, such as hate and spite, in the deepest pits of hell. As such, her strength far exceeds the normal Dream Demons that Merry or Engi have encountered before.

In her own daydream, Mistleteinn can use water to make droplet projectiles which have a strong impact and can also expand to envelope the victim holding and drowning them at the same time, as seen when capturing Isana to lure Parade out.

Mistleteinn also has two leafy stem-like tendrils which she uses as ranged and close combat weapons, as we see her fight Merry with them, and she extended them to great lengths to stab Engi whilst she was flying and using her own projectile sword attacks. The stems are very sharp and lethal as they were shown to pierce even Leon's metallic armor and later slice him in half.

There are some plant-like weapons in Mistleteinn's arsenal and she used them to summon weapons that resemble spears or staves. These, like the tendrils ,are used for both long and short range attacks. These weapons are created by crimson petals which make frequent appearances when we meet Mistleteinn. We also see Mystletainn use plants to do her dirty work as she creates seeds which grow into enormous flowers which Mr. Ijima calls the 'Bud of Despair', "in which nothing but hopelessness exists". Mistleteinn also uses sharp bud-like projectiles which she fires at Yumeji.

In a bid of desperate defense, for fear of death, Mistleteinn displayed an ability to swallow other Dream Demons whole. It is unknown if there is a size limit, but she appeared around Parade looking swollen around the abdomen until she compressed her body into regular size. Upon doing this, she informed Merry and co. that if she was defeated, then the demon inside her would be also.

As mentioned previously, Mistleteinn is in a league above the average Dream Demon, in the sense that her power, speed and defense are exceedingly high. This is verified when we see her both counter Merry's fists and also breaks Engi's swords with a single finger. Also, her defense is incredible, since when Yumeji attacks her with one of Engi's swords, it breaks off her side, indicating that she was much more tough/resilient than the sword, and when Engi lands several attacks on her, Mistleteinn remains unharmed, adding "is that all you can do?". Mistleteinn's speed is also superb as she easily dodges the combined attacks of both Merry and Engi.

What's more, Mistleteinn is omnimalevolent, making her the most evil Dream Demon to exist since she's born from all the evils of Human dreams. In full context, she's universally evil (meaning she's all malevolent in nature). Trait wise, she's devoid of all redeemable traits, complete and utterly ruthless, fraudulent and beyond unforgivable (except to users of Omnibenevolence and Omnineutrality, and especially Deities). 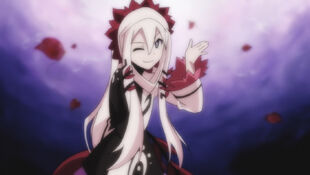 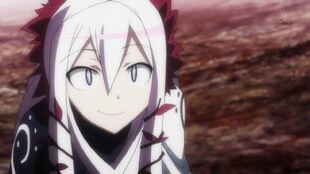 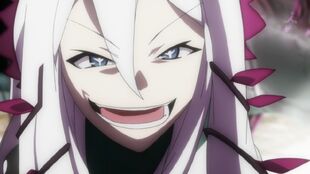 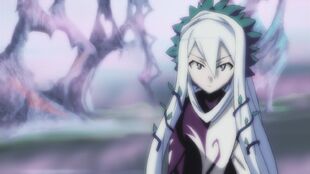 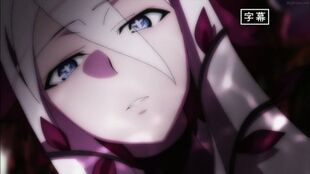 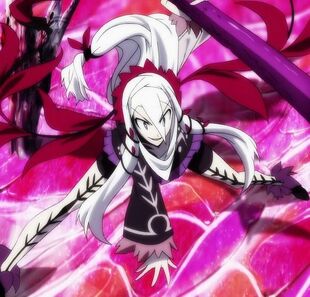 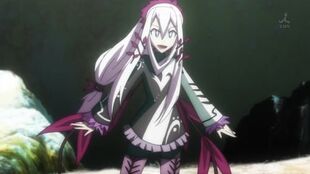 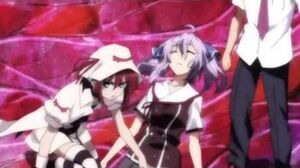 Mystletainn Clip
Add a photo to this gallery

Retrieved from "https://villains.fandom.com/wiki/Mistleteinn_Treesea?oldid=4259085"
Community content is available under CC-BY-SA unless otherwise noted.