Misty-Re, also called the "Dark Presence Undercover Spy", is a female echidna. She is a member of the Dark Presence, possibly in the Dark-Eyes faction.

She got a position as a maid in Castle Mobius and infiltrated there in 3265. She revealed herself in 3267 by gassing Silver the Hedgehog unconscious after flirting with him. She then got knocked out herself by King Sonic using her own gas-gun. 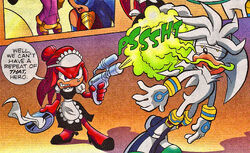 Misty-Re knocking out Silver after flirting with him 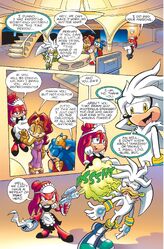 Misty-Re flirting with Silver, then knocks him out with a gas-gun