Misty (My Life as a Teenage Robot)

Member of the Teen Team (formerly)

Tormenting her enemies (especially the Crust Cousins), getting paid for saving the day, hanging out with Jenny (formerly).

Help whoever she can only if she is paid for her services afterwards (currently).

Misty is a recurring superheroine, later turned villain in Nickelodeon animated series My Life as a Teenage Robot. Misty is a "Phantom Ninja Alien" from space that first appeared in "Teen Team Time" as a member of a superhero team dedicated to save the day.

However, in her later appearances, Misty became progressively more selfish and rude towards anyone, including Jenny herself, going as far as not protecting the people from Tremorton when they were being attacked by a monster rabbit only because they wouldn't pay for her service.

She was voiced by Audrey Wasilewski, who also voiced Tuck Carbunkle and Vexus' Nanobot in the same show.

Misty was originally a member of the Teen Team until the team dissolved at the end of the episode. Misty returned in "Teenage Mutant Ninja Troubles", now staying on Tremorton to be with Jenny at Tremorton High. There, she also meet the Crust Cousins who also take their time to make fun of Misty just like they usually do with Jenny. However, Misty started to become more ruthless on her ways of bullying the Crust Cousins, to the point of making them cry of fear.

Misty would later return in "Mist Opportunities", but now having become more selfish and greedy in contrast to her first appearance. In one of her most ruthless moments, Misty gets the idea of using a bus full of children as a baseball bat to hit anybody against a hospital and after commenting her lack of concern for her actions, Jenny punched her straight in the face engaging in a battle between Jenny, Misty and the monster rabbit. However, after the monster rabbit was getting to much on the way, Misty throws it far away to the sky, thus continued beating her. After Jenny sadly mentioned that she thought they were friends. Misty stops and says that she would have destroyed her if she was paid to do it, before finally leaving planet Earth, possibly forever. 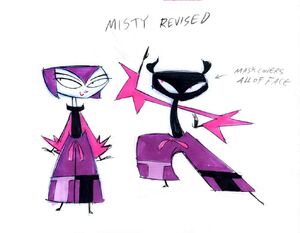 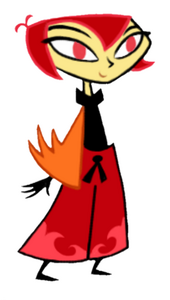 Misty's appearance as for "Mist Opportunities" 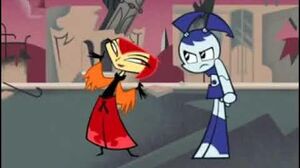