Villains Wiki
Register
Don't have an account?
Sign In
Advertisement
in: Beat'em Up Villains, Video Game Villains, Female,
and 11 more

On & Off Brute
Misuzu (in Japanese: みすず) is a recurring character and occasional villainess in the Kunio-kun video game series. She is a tough giantess who is very hard to defeat without knowing her attack patterns.

She is voiced by Keiko Yamamoto in the main Nekketsu Series and by Laila Berzins in River City Girls.

Misuzu is a senior student at the Taiyō Academy in Tokyo, Japan. Misuzu is respected by her peers because of her strength and large size. Most of the time, Misuzu will try to harm Kunio who is the main protagonist in the Kunio-kun series. Other times, she will leave him alone and may even get along with him. She comes from a wealthy family who often goes to other parts of the world by riding on an airplane for vacation.

Kunio's friend, Hiroshi, is abducted by members of the Yakuza. Kunio sets out to rescue Hiroshi. He manages to fight his way through rival students and a biker gang. Later, Kunio reaches a downtown district where he encounters Misuzu and other female students from the Taiyō Academy. Most of the students use chains or their purses to harm Kunio. He manages to beat them up by himself. Kunio is then approached by Misuzu. She attempts to crush Kunio by using her superior size and strength. Despite Kunio's smaller size, he manages to knock Misuzu unconscious. Afterwards, he leaves the district and continues to search for Hiroshi.

Later in the game, Misuzu encounters Kunio and his friend Riki inside Sabu's mansion. She explains that she was recently hired as one of Sabu's bodyguards. As part of Misuzu's new job, she fights Kunio and Riki. They manage to defeat her again. She dies this time but warns Kunio and Riki about a self destruct program installed in the mansion.

Misuzu appears in the spin off Kunio no Nekketsu Dodgeball Densetsu. Unlike the previous games, Misuzu has a friendly personality. She is part of a dodgeball team consisting of herself, Sabu, and Shinji. In the game, Misuzu is a rival player to Kunio and his team. She is playable in this game. Misuzu can be selected as the captain of her dodgeball team.

Misuzu is the head of the River City High Defense Force. She serves as an obstacle against any student who tries to escape from detention. 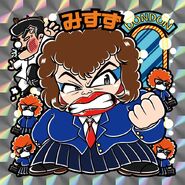