In the Line of Fire

Kill the US President.

Mitch Leary, also known as Booth, is a cold and psychotic CIA assassin and the main antagonist of the 1993 thriller film In the Line of Fire.

He was portrayed by John Malkovich, who also portrayed Cyrus Grissom in Con Air, Teddy Deserve in Knockaround Guys, Quentin Turnbull in Jonah Hex, Pascal Sauvage in Johnny English, Humma Kavula in Hitchhiker's Guide to the Galaxy, Vicomte Sébastien de Valmont in Dangerous Liaisons, Dave in The Penguins of Madagascar, Galbatorix in Eragon, Teddy KGB in Rounders, and Tom Ripley in Ripley's Game.

Mitch Leary was once a successful, highly skilled CIA agent who was fired for being too dangerous. Leary was an expert with all types of weaponry. He was also good with designs for new firearms and other unorthodox items, along with an IQ the level of a genius and expertise in disguise. Under immense amounts of pressure, Leary was unable to adjust to civilian life on the outside, and snapped, suffering a psychotic break and becoming a "wetboy". Leary began growing delirious, insisting that the government needed to be "taught a lesson", and he began to harbor an obsession with killing the President of the United States.

He slowly grew an obsession with Frank Horrigan, a disgraced and troubled Secret Service agent for failing to save John F. Kennedy, preying on his weaknesses, using them to get Horrigan angry, even calling himself "Booth". He saw this as a sick kind of "game", deliberately giving the Secret Service information so he could both challenge himself more and get the government afraid of him. As the election approaches, Leary makes a substantial donation to the president's reelection campaign under the assumed name of James Carney, allowing him access to a presidential banquet in California.

Horrigan and his partner, D'Andrea, both start tracking "Booth" down, and then learn of his true identity. They begin talking to his former friends, who tell horrifying stories of how they witnessed Leary's impending mental breakdown. One of his friends explains that Leary showed great generosity to him, even going so far as to buy him a several-thousand dollar wheelchair. However, the delusional Leary became convinced that he stole one of his designs, and told him that the "penalty for his disloyalty was death".

Even though he is well-aware that his calls are being traced and tapped, he nonetheless continues to call Frank, taunting him for failing to save Kennedy. Leary uses a device he made to make tracing his calls impossible, but one time they do manage to trace his call and Horrigan and D'Andrea chase him across the rooftops of the neighborhood. After jumping to catch Leary, Frank barely grabs the edge of the roof and is unable to pull himself back up. Leary draws his Glock 19 pistol and holds it on Horrigan for a moment before lowering it and offering his hand, telling Horrigan to take it before he falls. Horrigan refuses and draws his SIG-Sauer P228 pistol, but Leary knows that Horrigan is bluffing. Leary tells Frank that he doesn't have the guts to shoot Leary and also fall to his own death, therefore saving the president.

As an act of insanity, Leary taunts Horrigan by wrapping his mouth around the muzzle of the gun, encouraging Horrigan to pull the trigger. When he doesn't, however, Leary tosses him onto a fire escape, but D'Andrea arrives and holds his gun on Leary. When D'Andrea looks away to triumphantly tell Horrigan that he finally got him, Leary pulls his hidden Glock and shoots D'Andrea in the forehead. D'Andrea's corpse leans off the side of the roof and Leary shoots D'Andrea in the head again, for good measure, causing blood to spill from D'Andrea's mouth. Frank feels horrible about this, because D'Andrea had told him he was going to quit, but he talked him out of it.

Leary then built a composite, two-shot zip gun out of heavy duty polymers. At the date of the dinner, Leary heavily disguised himself with glasses, a fake nose, and a grey toupee, hiding the plastic frame in his pants, the springs in his pen and the bullets in his keychain, allowing him to flawlessly sneak the weapon through security. He assembled the pistol underneath the table and attempted to kill the president, however Horrigan arrived and took the bullet instead. Having survived with the use of a bulletproof vest, Horrigan is taken hostage by Leary, who shoots a secret service agent who attempted to arrest him. In the denouement, Leary takes Horrigan into a scenic external elevator in the hotel. The elevator stops and Leary uses his coat to knock out the light bulbs, obscuring the view of the sharpshooters. Leary then attempted to do a murder-suicide with Horrigan, but not before demanding a thank-you for restoring his image.

Horrigan refuses to show any respect to Leary, which angers him. Horrigan then uses his earpiece to discreetly tell the snipers to fire regardless, and aim high, hoping to hit Leary. Leary wises up and sees this, but before he can shoot Horrigan, the sharpshooters fire, missing Leary, but taking out the glass. Leary and Horrigan tumble and he falls out the elevator, grabbing onto the sides. Horrigan attempts to save Leary's life, but Leary, not wanting to spend the rest of his life in prison, lets go of the elevator and falls to his death on the plaza below.

Although Leary was a cold-hearted monster, he did appear to respect Horrigan, and, oddly enough, thought of him as a friend. Before he died, he left a sentimental message on Horrigan's answering machine: 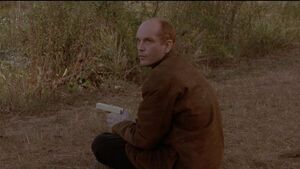 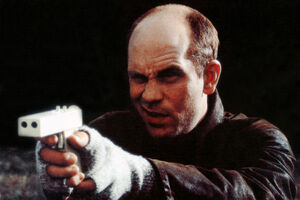 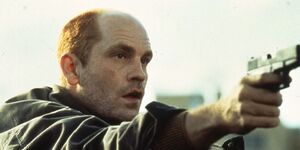 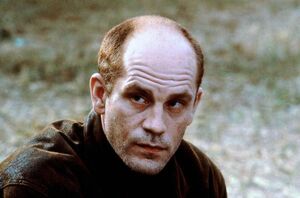