Obtain the Yellowjacket for HYDRA.

Mitchell Carson is the secondary antagonist of the 2015 blockbuster superhero film Ant-Man. He is the Head of Defense for S.H.I.E.L.D, later revealed to be a representative of HYDRA.

He was portrayed by Martin Donovan, who also played Zaman Druce in DC's Legends of Tomorrow.

In 1989, during the construction of the Triskelion, Carson, with Howard Stark and Peggy Carter, attempted to replicate Hank Pym's Pym Particles, much to the anger of Pym, who berates Carson for trying to steal his work. During the argument, Carson tries to justify his actions by claiming that Pym is responsible for the death of his wife Janet van Dyne, but this only provokes an angry Pym to smack Carson in the face, resulting a nosebleed.

Having enough of Carson's behavior, Pym furiously resigns from S.H.I.E.L.D., taking his particles away with him while declaring that no one will have his formula as long as he lives. Carson angrily demanded that Pym should not be allowed to leave with the particles, but Stark and Carter reprimand Carson for his behavior towards Pym as they refuse to declare Pym an enemy of theirs despite their fallout with him.

Eventually, Carson's true allegiance with HYDRA was exposed following the death of Alexander Pierce, but he hid himself away from being tracked down by the authorities. In 2015, Carson made a business deal with Pym Technologies CEO Darren Cross regarding the marketing of the Yellowjacket Suit and the Pym particle for HYDRA. As part of their deal, Carson was assigned to murder Pym, a task he willingly accepted.

At the presentation for the Yellowjacket, Cross secretly plans to sell the suit and the Pym particles to Carson and his arriving agents (including the HYDRA Buyer). However, this is interrupted by Scott Lang and Hope von Dyne, who were present during the presentation. During the resulting chaos, Carson's agents were take down while Carson manages to escape with Cross' replicated particles (despite being besieged by tiny ants). It is unknown what happened to Carson following Cross' death at the hands of Lang. 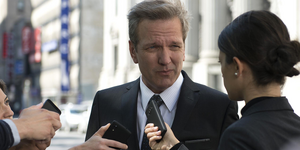