Observing the distribution of Zodiarts Switches and events that unfold because of them.

Find users for all twelve Horoscopes Switches to complete the Day of Awakening and contact the Presenters.

Mastermind
Mitsuaki Gamou, also known as the Sagittarius Zodiarts, is the chairman of the Amanogawa High School School Board and the main antagonist of Kamen Rider Fourze. He is the leader of the Horoscopes and the one who is responsible for the distribution of the Zodiarts Switches in order to find users for all twelve Horoscope Switches. Once all twelve Horoscope Switches have users, Gamou will be able to complete the Day of the Awakening and make contact with the Presenters.

He was portrayed by Shingo Tsurumi.

During the summer of 1969, in conjunction with Apollo 11 beginning its exploration, Gamou made contact with a mysterious alien race called the Presenters and promised to meet them someday. Gamou later became an astronaut in OTSO and researched the powers of Cosmic Energy with his colleagues Rokuro Utahoshi and Kuniteru Emoto.

20 years prior to the series, Gamou and Rokuro discovered the Core Switch created by the Presenters and began working to reverse engineering the Core Switch. However, the two undertook very different routes from each other in this process, with Gamou creating the Cosmic Switch as the basis for a system that would forcefully evolve the human body in seconds to be able to withstand space while Rokuro researched a safe transwarp system which would take years after he was dead to be complete. Their differing ideas would lead to their friendship withering and eventually, three years after finishing the Switches, Gamou had Emoto steal the Zodiarts Switches from Utahoshi before the OSTO Space Station exploded.

10years prior to the series, with funding from Foundation X, Gamou built Amanogawa High School directly under an atmospheric vortex known as The Hole, using the conditions to create the twelve Horoscopes switches so he could execute the Day of Awakening to reach the Presenters at the cost of the Earth's destruction.

Gamou observed from the background as Libra Zodiarts, Kouhei Hayami and Scorpio Zodiarts distributed Zodiarts Switches to the students of AGHS. After Sarina Sonoda, the Scorpio Zodiarts, failed to defeat Fourze as Scorpio Nova, Gamou confiscated her Zodiarts Switch, but gave it back to her after she convinced him to give her a second chance. However, after Sonoda was defeated again by Kamen Rider Meteor and almost had her identity uncovered, Gamou tells her she is of no more use to him and has Virgo Zodiarts banish her to the Dark Nebula. Gamou later has her disappearance covered up saying she had to leave due to health problems.

After Kouhei Hayami/Libra Zodiarts was defeated by Fourze, Gamou was prepared to have Virgo banish him to the Dark Nebula, but stayed his hand when the principal manifested the Eye of Laplace ability. Gamou ordered him to seek out the remaining Horoscopes so the timetable for their further plans could be accelerated.

After Tomoko was sent into the Dark Nebula, Emoto told Gamou he would deal with the rest of the Kamen Rider Club once they had served their purpose. Gamou then transformed into the Sagittarius Zodiarts to the awe of his subordinates and proclaimed he would eliminate the group should they fail. After discovering that Emoto had been providing assistance to the Kamen Rider Club as Tachibana, Gamou transforms into Sagittarius and fatally wounds him as well as overpowering Fourze and Meteor. Returning to his lair, Gamou laments losing his last true friend.

Gamou later recruited Dark Yuki as the Gemini Zodiarts, sensing a kindred spirit within her as Yuki had also heard the Presenters calling to her. Following Dark Yuki's destruction, Gamou began to suspect that Kengo was the holder of the Core Switch.

After Ran Kuroki was identified by Hayami as the final Horoscope, Gamou revealed himself to the Kamen Rider Club and formulated a plan with Hayami to get Ran to use to Horoscopes Switch by having Hayami fake a defection. The plan succeeded and with all twelve Horoscopes found, Gamou prepares to execute the Day of Awakening. However, Gamou discovers that while it is happening he is open to attack. Fourze attempts to defeat Gamou with a Super Galaxy Finish, but Hayami blocks the attack and is killed instead.

However, Kengo's Core Child powers fully manifest and render Gamou unable to use the Horoscopes Switches. After having Leo to attack the Rabbit Hatch to lure out Kengo, Gamou destroys the Core Switch sustaining Kengo's life, resulting in the death of the Core Child.

After announcing the end to the entire school on the first day of the spring semester, Sagittarius Nova has a final confrontation with Kamen Rider Fourze. Sagittarius Nova fights Fourze in his various forms before their fight leads them to the school gym where the Kamen Rider Club members hold a "graduation ceremony". Sagittarius Nova is finally defeated by Fourze's Youthful Galaxy Great Great Great Drill Kick attack. As Gamou's body begins to dissolve into stardust, Gamou finally accepts Gentaro's friendship and asks Gentaro to take his place in meeting the Presenters. Gamou then uses the Aquarius Switch to recreate the Core Switch and revive Kengo. Gamou apologizes to the Presenters that he could not keep his promise but tells them that his students will come to them in his stead before evaporating in a plume of red Cosmic Energy.

The Sagittarius Zodiarts was one of the revived monsters in the Space Shocker army. During the battle against the combined army of Kamen Riders, Super Sentai teams and Space Sheriffs as they approached the Genmu Castle, Sagittarius was seen fighting Gokai Red.

In the alternate timeline caused by by Shocker rewriting history with their History Modifying Machine, Sagittarius Nova was among the many monsters that served the evil organization after it achieved global dominion. During the final battle against the Kamen Riders, Sagittarius Nova initially faces Fourze. However, after he is erased by the Rider Robo, Sagittarius fights Zeronos instead and is destroyed by Zeronos Zero Form's Full Charge.

An A.R. World version of Sagittarius Zodiarts is among five villain leaders summoned by Swartz in the final battle, alongside Gamedeus, Utopia Dopant, N-Daguva-Zeba and Evolt. 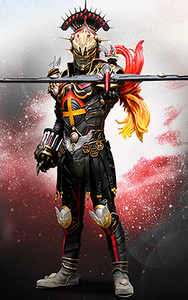