Mitsuo Katagiri is the secondary antagonist of Godzilla 2000: Millennium. He is the founder and leader of Crisis Control Intelligence (CCI). He believes that Godzilla must be destroyed. However, he later abandons that goal and when finally confronted by the monster, a humbled Katagiri was amazed by the creature and decided to stay and meet his end at it's hands.

He was portrayed by Hiroshi Abe.

Mitsuo Katagiri is the founder and leader of Crisis Control Intelligence. It is his philosophy that Godzilla must be destroyed. Katagiri is not afraid to risk a few casualties to do so. Throughout most of the film, Katagiri tries to control, study, and eventually destroy the Millennian spacecraft. Katagiri is responsible for defending the people against Godzilla. Although he is technically fighting on the same side of the film's protagonists, Katagiri could easily be described as the villain, as he opposes Yuji Shinoda, who wants to preserve and study Godzilla. Katagiri even orders to detonate a building in an attempt to destroy the Millennian UFO while he knows Shinoda is inside. After the battle between Godzilla and Orga, Katagiri stands still on a balcony as Godzilla approaches him, refusing to evacuate. Facsinated and humbled, Katagiri remarks that he had never seen Godzilla this close before, and defiantly shouts Godzilla's name as Godzilla destroys the balcony, killing Katagiri. 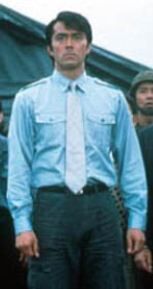 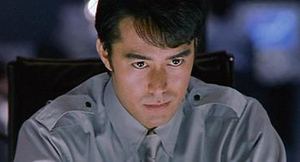 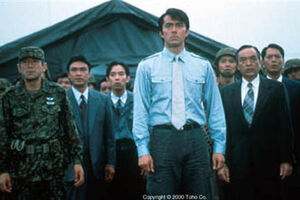