Become the next president.

Being a puppet for the Fancy Feast Council.

Mittens 2.0 is the secondary antagonist of the YouTube series, Politicats. He is a robot built by the Fancy Feast Council to run for president.

He is a parody of the 2012 Republican candidate for president, Mitt Romney.

Prior to debating Black Cat, Mittens 2.0 put out several ads telling people to vote for him and advocating for a more conservative society.

Mittens 2.0 later debated Black Cat, with what he said being controlled by Wonky. However, Wonky presses a button that causes Mittens's rockets to activate and make him fly through the roof, causing the Fancy Feast Council to lose him.

Mittens at some point came under the control of the mysterious Cat Painting and began building more of himself in a factory.

While the Fancy Feast Council prepared to leave Earth in wake of the Martian invasion, the Mittens army flew around attacking and terrorizing people. However, Wonky appears with his Wizard friend, who throws his sign up in the and transforms it into a boombox. The boombox sends out soundwaves that deactivate many of the Mittens 2.0 robots. 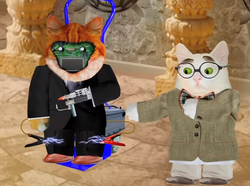 Mittens getting worked on

Mittens in front of the national flag 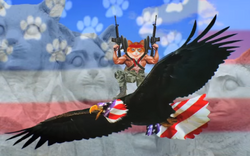 Mittens in one of his ads 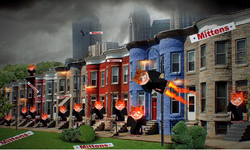 The Mittens 2.0 army
Add a photo to this gallery
Retrieved from "https://villains.fandom.com/wiki/Mittens_2.0?oldid=3542483"
Community content is available under CC-BY-SA unless otherwise noted.