Tactical mind
Authority over the guards of Green Dolphin Street Prison
Jail House Lock:
Ability to fuse with and move through its surroundings
Ability to induce short-term memory loss

Miuccia Miuller, also known as Miu Miu, is a minor antagonist in JoJo's Bizarre Adventure: Stone Ocean. One of Enrico Pucci's minions and the chief guard Green Dolphin Street Prison, she is tasked to stop Jolyne Cujoh and Emporio Alnino from escaping the prison following Enrico Pucci's absorption of the Green Baby and the death of Foo Fighters. She wields the Stand known as Jail House Lock.

In JoJo's Bizarre Adventure: Eyes of Heaven, she was voiced by Akeno Watanabe.

For an unknown amount of time, Muiccia Miuller has been working with Enrico Pucci to ensure Stand Users do not escape from the prison, on top of also being the head guard.

Muiccia Miuller first appears outside a temporary cell holding Jolyne, warning her to not escape and she will allow Jotaro's Stand Disc to exit the prison without issue if she choses to agree under those terms, both of which being under Pucci's command. While she also warns her that she'll gladly kill her and her allies if she chooses to ignore the priest, Jolyne refuses her foe's command, punches Miuccia square in the face, and triggers the effects of Jail House Lock.

With Jolyne under its spell, Muiccia manages to sneak in the prison as an inmate to further toy with Jolyne, adding a crushed cockroach into her food before disguising it with sauces and removing some of the written information on her arms, while also musing on the nature of her Stand's abilities as Jolyne rewrites her info with Stone Free and heads off to see Emporio. As this goes on, Emporio finds himself in a constant memory loop, causing him to be shocked repeatedly by a water-soaked cable by him forgetting about the water.

As Jolyne continues to make her way to Emporio, Muiccia continues to stalk Jolyne to instigate an attack, forcing Jolyne to follow her in an attempt to lure her into a restricted area and have the guards shoot her down. However, Jolyne manages to sneak past the guards and find Emporio, allowing her to save the child and find Emporio's plan to print out a picture of Muiccia in order to have Jolyne remember her. However, Muiccia emerges from outside Emporio's room, declares both to be "prison-breakers", and starts to shoot at the heroes using a firearm, with Jolyne managing to block the shots while a stray bullet hits Emporio and his computer, breaking the machine. Firing against, Jolyne manages to use the bullets reflection to condense the given information and deflect all bullets, with some hitting her foe. A wounded Muiccia flees with our protagonist in hot pursuit, and while Jolyne manages to catch her, Muiccia summons her guards to not only surrond Jolyne, but leave her unable to remember her and allow her to deal some clean hits as guards further surround Jolyne. However, as the situation looks dire, Emporio delivers a binary version of the image he planned to show to Jolyne, to which Stone Free converts into a seeable image of the chief guard's face. When Jolyne asks about this, Muiccia foolishly tells her to perish, to which Jolyne's suspicions are confirmed and allowing her to easily defeat Muiccia. Now a hostage, Muiccia is forced to use Jail House Lock on her guards to allow Jolyne, Emporio, and a rescued Ermes to escape with little issue.

Miuccia Miuller is a woman who measures 5'7 feet tall and has pale skin, green eyes, blond hair styled into long strands and circular eyebrows, and pink makeup. For clothing, she wears a pink-colored, buttoned coat with orange ends and a gray belt to signify her official uniform and equipment, but when not wearing this coat, she wears a dull-orange, wrinkled shirt with eyeball like pom-poms at the bottom (these possessing green "pupils", a magenta skirt with various words written on it in black text, purple pantyhose with various holes littered through it, and green shoes.

As the lead guard of a prison, Miuccia Miuller takes her role as one seriously, and while willing to show mercy to those who don't trouble her, she also has no mercy to those who try and escape, with even the young Emporio being at risk of both gun and Stand ability. Miuccia is also not above using dirty tricks, stalking Jolyne in disguise, contaminating her food with a dead bug, and even technically torturing Emporio with her memory loop. Furthermore, Miuccia is highly skilled in tactics, using her allies to overwhelm her foes and planning to attack Jolyne's arms to force her to not attack.

Miuccia Miuller's Stand, Jail House Lock, has the primary ability of inflicting a sadistic form of short-term memory loss on its targets, making sure they can only remember three things at once, with this ability activating if a prisoner touches either bar or wall of any area beyond the visitation rooms. Once a target learns a forth concept or idea, they will forget the first one they learned in a string of three, with each following memory removing the earliest one. To make up for the lack of any true combat-oriented ability, Miuccia uses this ability to deadly effect, allowing her to play mind games with her foes and use other tricks to force them to forget things in an endless loop. While this ability is dangerous on top of its Stand User claiming that this process will eventually destroy her foe's ability to form thoughts, this ability is not immune to people either combining a lot of information into one memory or them using outside help (such as notes or images) to allow them to sidestep this ability. Jail House Lock can also merge itself into its surroundings to form traps, move quickly, and dodge attacks as long as these surfaces remain undestroyed, lest damage be given to Miuccia.

Gwess describing Miuccia Miuller's appearance as she stands before Jolyne in disguise.

Miuccia Miuller placing a crushed roach inside Jolyne's food before covering it in various condiments to play a trick on Jolyne.

Miuccia Miuller musing on the nature of her Stand. 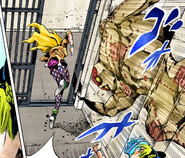 An example of Jail House Lock gliding through surfaces as Miuccia Miuller flees from Jolyne.

Miuccia Miuller shooting at Jolyne after tracking her to Emporio's room.

Miuccia Miuller boasting about her Stand as Jolyne gets increasingly surrounded by guards.