NOTE: This article is about the incarnation of Mixmaster from the Transformers live-action film series. The mainstream version can be found here: Mixmaster.

Hanging out with his fellow Constructicons to await orders from high ranking Decepticons such as Starscream and Soundwave.

Mixmaster is a recurring antagonist in the Transformers Cinematic Universe. He is a Constructicon who transforms into a Mack Metro Liner concrete mixer & forms the head of Devastator.

Mixmaster, alongside Long Haul, Rampage & Scrapmetal are first seen aboard a cargo ship. Ravage, who was sent by Soundwave, landed there & called them to help him dive into the Laurentian Abyss to revive Megatron. Upon arriving there, Scalpel examined their leader's corpse & stated they needed a small Constructicon to repair him. Mixmaster & Long Haul proceeded by killing Scrapmetal to use as a source of spare parts & Scalpel injects the shard to revive him, which is a success.

Mixmaster is among the few Decepticons who participated in the Battle of Egypt. He is seen trying to capture Sam Witwicky & Mikaela Banes, only to be attacked by ex-Decepticon veteran Jetfire, who sliced him into half & squashes him like a cockroach, before being drilled by Scorponok, who also got killed.

Another Mixmaster who didn't transform into his robot mode was seen forming the head of Devastator, only to be killed by a railgun.

Transformers: Dark of the Moon: The Game

Despite being brutally killed by Jetfire in the second film, Mixmaster however survived in the game adaptation of Transformers: Dark of the Moon, serving as a boss in the Autobot campaign. This might have something to do with the fact that the Constructions of the live-action films are portrayed as mass-produced body-types.

Mixmaster was one of the Decepticons dispatched to intercept an evacuation led by Ratchet and a NEST convoy. He led an assault group which was able to destroy the convoy; however, the evacuation had already ended. Since his mission had failed, Mixmaster tried to console himself by killing Ratchet and was able to put him in a critical state before Ironhide arrived and helped him. Mixmaster threw Ratchet away and ordered his troops to attack Ironhide, but the Autobot defeated them. Mixmaster then decided to take care of the situation by himself, but ended up trapped under a platform dropped by Ironhide.

However, this didn't stop him for too long, and he was able to quickly get out and place his remaining soldiers into a scrapyard. The troops were once again defeated by Ironhide and his new weapon sent by Que/Wheeljack. Mixmaster was too confident that the weapon wasn't strong enough to take out his shields, and he attacked with no warning. During the battle, his shields were in fact destroyed by Ironhide's new weapon, turning the tide of the battle towards Ironhide's favor. Ironhide defeated the Decepticon and terminated his opponent, gangland execution-style. 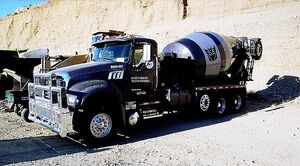 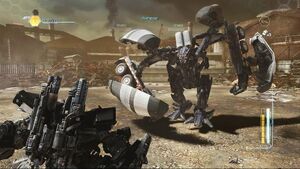 Mixmaster in Transformers: Dark of the Moon: The Game