Major in a terrorist group

Miyo Takano is the main antagonist of the Higurashi no Naku Koro ni series.

She has somewhat long blonde hair, and eyes that are distinctively more droopy than other characters, making her easy to distinguish. She usually wears a pink blouse with a green jacket overneath along with a green ribbon across her chest. Her military outfit is completely black except for that ribbon, She wears a skirt, a cape and a military hat.

Her personality is quite twisted, as she seems to derive pleasure from frightening people with tales of Hinamizawa's past. She also sees people as guinea pigs for her research, and only truly cares for her grandfather and his friends. She is infamous for being an occult maniac, almost to the point of being considered a joke, as Mion mentions to Keiichi that Miyo tells a different interpretation of Hinamizawa's mythology to every person (the version she once told Satoko supposedly claimed that Oyashiro-sama originated from sea creatures). She has many scrapbooks containing all her different theories about Oyashiro-sama's curse, and she sometimes lends them to people for fun, such as Shion and Rena. The one she gives Rena, file 34, contains the theory about parasites controlling people's minds, and seems to be loosely based on the Hinamizawa syndrome theory, making it the theory closest to the actual truth (save for the part about aliens). She also talks in a very condescending and patronizing manner, sometimes causing people to hate her.

Miyo was born under the name Miyoko Tanashi and was living happily with her parents. However, a car crash occurs and her parents are killed, leaving Miyo an orphan. She was taken to the orphanage where all the kids were horribly abused. Together with three other girls, she escapes and meets a man named Hifumi Takano, who was her father Takemitsu Tanashi's mentor. Hifumi decided to adopt Miyo, and Miyo changed her name from "Miyoko Tanashi" to "Miyo Takano".

She is a nurse and the mastermind of the events that happened in the first six arcs. She was one of the victims of the curse in 1983, and according to the police was found to have been burned to death in a canister in the mountains. However, the autopsy later revealed that she had died 24 hours before the Watanagushi festival had even occurred. During Tatarigoroshi-hen, she mysteriously shows up to give Keiichi a ride after he finishes his business with Satoko's uncle, and the revelation of her 'death' prior to this incident shocks him badly. She is very popular at the Irie Clinic where she works. She is very interested in the history and mythology of Hinamizawa, and in one story arc gives Rena her research on the matter prior to her own death.

Miyo also has an obsession with attaining the level of Godhood. She first adopted the notion of becoming a God as a child, when Hifumi, not long after rescuing her from the orphanage, tells her about the story of Jesus's resurrection. He tells her that it was not Jesus's physical body that was resurrected, but the belief in his teachings. Hifumi believed that one becomes a God when they make a great achievement that puts their name in history, so that even when they die, they will be immortalized in a sense. He then expresses his desire to become a God himself, by proving the existence of Hinamizawa syndrome and making a name for himself in the scientific community. When he dies, Miyo takes it upon herself to carry on his research and have it recognized by the world. Her ultimate goal is to become a God along with Hifumi, so that they can be together for all eternity.

Later in the series, it is revealed that her death, in each case, was faked to throw off suspicion and allow her to act more freely on her true plans. The reasons behind her actions are revealed in the second season as the show delves into her past. The government had her sent to an orphanage after she lost her parents. She and other children were abused repeatedly there, and eventually tried to escape. They are pursued, largely because the orphanage gets government money based on the number of children they house. She evades capture long enough to call Hifumi Takano's (her father's former professor) number for help as her father had instructed some time before his death. She is re-captured, but is eventually rescued and adopted by Hifumi.

Hifumi becomes a sort of grandfather for her, and she cares deeply for him. Hifumi was the one who started Miyo on the path of medicine with his study of Hinamizawa Syndrome. When Hifumi died, having been humiliated and discredited by his superiors, Miyo decided to carry on his studies in order to prove his theories, and, in doing so, was perfectly content to make the entire village go mad with paranoia by killing the Queen Carrier, and then ordering the annihilation of the villagers as well. She is literally obsessed with proving the theories he spent his life on and making a name for both of them.

She has control over an elite squad of soldiers called the Yamainu, provided to her by the "Tokyo group", who carry out much of her dirty work, although she does not hesitate to do some of it herself. In many cases she has been personally responsible for the death of the Queen Carrier, who she disembowels and of her lover Tomitake Jirou, as she is seen dumping his body on the side of the road after injecting him with the H173. During this timeline, Rika and the club flee through the mountains while fighting off the Yamainu, but Takano arrives and personally murders Keiichi, Rena, Mion, Shion, and Satako before kidnapping and murdering Rika.

In the next timeline, Hanyuu takes a physical form and reminds Rika that Miyo is responsible for her deaths. She begins combating Takano's forces by faking her own death in order to deceive her, as well as keeping her away from Irie and Jirou to prevent them from being murdered by Takano. Her plan works and Miyo is eventually defeated without anyone dying. It is then revealed that her actions were ironically caused by her contracting Hinamizawa Syndrome, and she is taken to the Irie clinic for treatment.

Meanwhile, a young Miyoko Tanashi is approached by Rika's jaded astral form, Frederica Bernkastel, as she is going to a playdate with her friend the day her parents died. Bernkastel gives her the option of "living" or "dying". Miyo/Miyoko originally asks to live, and Bernkastel tells her to go play with her friend, as she was, but states her friend will not be there, prompting Miyoko to change her answer and asks to "die". Bernkastel tells her to go back with her parents and accompany them to the mall so that she can earn another flag pin for her collection, which causes them to board a different bus than the one that crashed, preventing Miyoko from ever meeting Hifumi Takano, and causing the Miyo Takano persona to "die".

While this seems like a noble deed on Bernkastel's part, it's implied that the events of the arcs went as they had, but without Miyo's influence- meaning that Hifumi's research was recognized by the UN, hastening the process of the virus being turned into a biological weapon, in which case, Hinamizawa was worse off without Takano. Whether or not this was one of Bernkastel's sadistic villainous acts or not remains unclear.

Miyo also has a variety of different roles in the first two episodes of Higurashi no Naku Koro ni Kira. In the first episode, Batsukoishi-hen, she dresses in a bunny costume and becomes seductive to the point of infecting Keiichi with the True Hinamizawa Syndrome only to be killed by his friends later, who afterwards almost end up killing Keiichi in an attempt to save him.

In the second episode, Ayakashisenshi-hen, she is one of the four generals of Tokyo Magika, the other three being Nomura, Tetsuro Okonogi and Teppei Hojo. She spread a fog all over a parallel version of Hinamizawa that made the residents act hostile towards those unaffected in order to fulfill her lofty goal of proving the magic theory left by her grandfather. She gave commands to the Ritual Tool Devil, Nail Ripper, until the magical girls Oyashiro Rika and Trap Satoko destroyed it and sent her flying into the horizon, where she screamed her apologies to her brother before making a twinkle in her place. Tokyo Magika later learned of Takano's defeat, and, while making fun of her for just being the weakest of the generals, decided to make plans for later attempts to defeat Rika, Satoko, and their friends.

Miyo's brief appearance at the beginning of Musubienishi-hen has her commenting on Keiichi and Mion's relationship thinking that they're both in love with one another. She is the first of three adults to comment on their relationship, with the second being Oryou Sonozaki and the third being Teppei.

Miyo also makes an appearance in this horror mystery light novel by Ryukishi07, published in 2007 and later as a manga. While the story is technically supposed to be considered separate from the Higurashi series, it was confirmed to have taken place in the perfect world of Saikoroshi-hen, where Frederica Bernkastel interfered and Miyo's parents were not killed (thus, no tragic events ever happened), so Miyo's real name "Miyoko Tanashi" is retained. The story also heavily focuses on her, as she is the first to be involved in [another] curse.

In the story which takes place at a normal city high school, Miyoko is drawn as an average, quiet girl with long black hair and a very melancholic expression, which contrasts heavily with her bright and bubbly nature as a kid. Compared to her personality as Miyo in Higurashi, she can be considered just as creepy and dark, if not more-so, than Miyo. Her signature laugh and way of speaking is also retained in the novel, so she speaks just like her adult self. While Miyo is at least seen to be "cute" and has retained some of her childish nature, no sign of such is ever apparent in Miyoko's character in this story. She is not very well-liked in the school and only has a few acquaintances, including a strange boy named Tomohiro Miyajima. Initially, Tomohiro did not speak to Miyoko that often, and they only knew each other as those who often glanced at and took interest in each other. One day, Tomohiro decides to invent a fake curse called "Ohone-sama's curse" and circulate it around the school, mainly for kicks and for easy money, knowing that people would donate to the donation boxes dedicated to the false god. Of course, Tomohiro and his friends knew it was a mere prank, however, they receive a note attached with 50,000 yen (approx. 644 USD) that asks for the god to curse Miyoko.

Soon after, Tomohiro witnesses Miyoko's death by falling off the rooftop of the school; this is later suspected to be a murder, but near the end for reasons unknown, she reappears, seeming perfectly alive and well with no damage done to her body. She jumps off the roof a 2nd time, only to have Tomohiro catch her this time. In the end, she is seen dancing in a school classroom.

Miyo also appears in this story. Here she fights herself through hell without having realised that she is long dead. 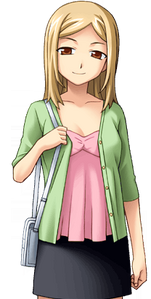 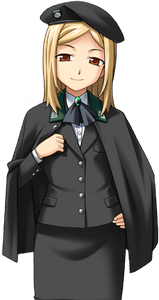 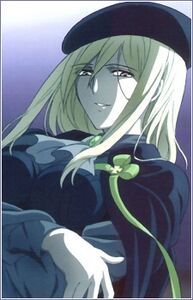 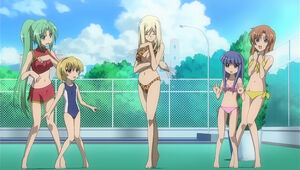 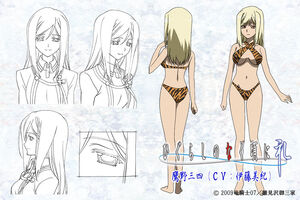 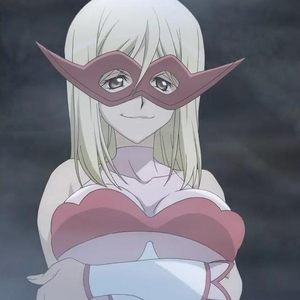 Miyo as a child Miyoko Tanashi. 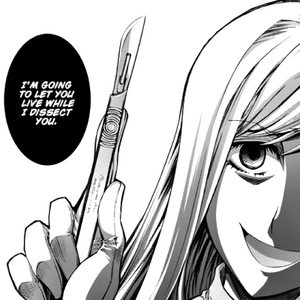 Manga
Add a photo to this gallery 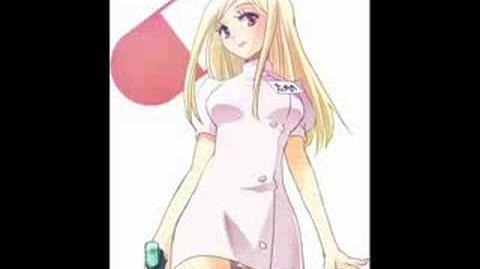 Retrieved from "https://villains.fandom.com/wiki/Miyo_Takano?oldid=3704795"
Community content is available under CC-BY-SA unless otherwise noted.