Members of the Moro Corps

Assist Moro in ridding the universe of law and order.

Miza, Iwaza and Kikaza are supporting antagonists of the Galactic Patrol Prisoner Saga in Dragon Ball Super. They are a trio of female convicts who are members of the Moro Corps.

Kikaza is a alien woman with a similar build, with curly pigtails and large glasses with large black eyes. Her clothing consists of a a Galatic Prison uniform that has been ripped to resemble shorts, as well as stockings that rise up to her theigh with black boots.

Iwaza is an dark skinned alien female with uneven yet attractive hair that goes to her back. The left having more hair than the right. She wears a black mini top and sleeves, resembling Android 21's majin form. Her Galactic Prison Uniform is wrapped around her waist similar to Miza's.

Upon fusing, the fusion adopts KIkaza's pigtails and Miza's mohawk. She had Kikaza's sleeves and mini tube top. The fusion is very large and  unnattractive unlike her componets who are slender and conventually attractive. Her prison uniform is wrapped around her waist just like Miza and Iwaza.

Miza, Iwaza and Kikaza are released by Moro's second wish, they then proceed to take over the facility and re-secure Saganbo's Ship. The trio and the rest of the prisoners use the ship to head to New Namek to help Moro.

When the Galactic Bandit Brigade head for Earth, Miza, along with Iwaza and Kikaza are three of the criminals who head off in order to steal some of the planets treasure. When Master Roshi gives chase to them, the trio beat him and knock him through the forest clearing. Miza vows to get payback, calling him an old creep, but when Roshi decides to fight blindfolded, the trio are unable to land a single blow. Frustrated and refusing to take Roshi's advice of returning to the Galactic Prison, Miza suggests that the trio fuse together though it is ultimately defeated by Goku upon returning to Earth. They are later recaptured by the Galactic Patrol and sent back to Galactic Prison.

The leader of the trio. Is the one who suggests the girl's fuse after being unable to hit Master Roshi.

The nerdy member of the trio.

The most beautiful member of the trio. 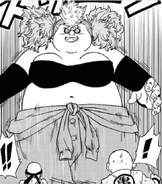 Kikaza, Miza and Iwaza's mugshots
Add a photo to this gallery

Retrieved from "https://villains.fandom.com/wiki/Miza,_Iwaza_and_Kikaza?oldid=3900438"
Community content is available under CC-BY-SA unless otherwise noted.