Executive of the Aogiri Tree

Miza Kusakari is a minor antagonist turned supporting protagonist of the dark fantasy manga series Tokyo Ghoul:re. She is a Ghoul whose known as Three Blades (in Japanese: 三枚刃 , Sanmaiba) and is a former executive of the Aogiri Tree organization.

Barely anything is known about Miza's past but she was most likely a lone wolf ghoul prior to the series and joined the Aogiri Tree once the organization was formed. She fought in a turf war with the ghouls known as the Bin Brothers and she agthered a following large enough to form her own group known as the Three Blades Gang and took control of the 18th Ward. Miza also became an executive at some point.

Miza is briefy mentioned by Eto as she's been hired by the Madam ghouls to act as security for the upcoming Auction to Ayato Kirishima on the roof of their current hideout.

Miza appears on a rooftop where she corrects Naki when he mispronounced "emotionslly unstable" and she then calls Naki an idiot when he rushes into battle recklessly against a team of Ghoul Investigators. She then leads a small group of her followers into battle to support Naki by killing Jun Numa. Soon afterwards, she becomes irritated when Naki shouts out her name. Miza appears at the Auction as security when the CCG bursts in and starts gunning down the crowd and ghoul guards. During the battle, Naki is wounded by Akira Mado and Miza has a brief conversation with Akira trying to convinceher not to kill Naki but Akira says that she'll kill him right now and Miza fights Akira only to have her sustain a wound in battle and retreats after Hinami orders her and the remaining Aogiri Members to do.

Miza then runs into Ayato Kirishima who manages to push back the CCG Forces in an effort to save Naki and he tells Miza that he did it only to protect his teammates and ditched Big Madam by his will and not by the orders of the Aogiri Tree. Miza respects the choice and she takes over leadership roles after Hinami fights against Seidou Takizawa  in an effort to save Ken Kaneki (Haise Sasaki) despite being overpowered and beaten. Miza then orders all Aogiri Forces to retreat for real after the S3 Squad had arrived confirming that the attack on the Quinque Steel Transport had failed.

Miza is seen in the events following the Auction Raid where she's in an Aogiri Base where she sees Ayato and Tatara argue over whether or not they should rescue Hinami. Miza recalls how Hinami was the nicest out of all the members and had very good abilities but Tatara shoots everyone down and Aogiri decides to then leave and fully abandon Hinami for good.

Miza comes across as an unusual woman due to her style. She has a distinctive hair style with very big pony tale and two knots on the side of her head. She's very short and wears long robes which are typical for an Aogiri member. Her mask is a three-way pyramid like shape to mach her kagune abilities.

Miza is a very serious and reasonable individual. She has a very short temper and always desperately tries to contain it especially when around irrational members like Naki. She appears to have taking a liking to Hinami as she talks to her very nicely and apologizes when things get out of hand. 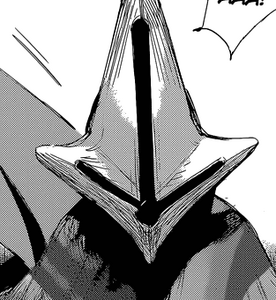 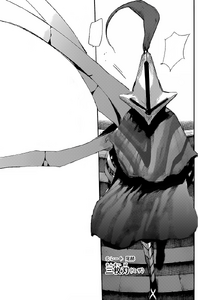 Retrieved from "https://villains.fandom.com/wiki/Miza_Kusakari?oldid=3369354"
Community content is available under CC-BY-SA unless otherwise noted.