To kill the Ronins.

To kill both Kai and Lady Mika Asano.
To overthrow Shogun Tokugawa Tsunayoshi and rule all of Japan alongside Lord Kira Yoshinaka.

Mizuki is one of the 2 main villains of the 2013 film 47 Ronin alongside Lord Kira.

Mizuki proved herself to be the most powerful adversary the titular Ronin groups ever faced, as she was so powerful that made Lord Kira, whom had greater plan than her, looked pale in comparison. She can levitate and fly at will, skillful in manipulating element of fire to incinerate her enemies, creating spiders with hallucinogenic venom out of a person's blood under the said person's consent, mystically enhanced superhuman attributes, and ability to shapeshifting at will where she can transform into a fox or huge furred, dragon-like flying serpent whom jaws can chew a full-grown man whole.

Her serpent form is arguably her trump card as Mizuki's bodily tissues in this form become harder that conventional weapons at that time merely bounce off her skin, and possesses formidable resistance against mystical weapons including swords forged by Tengu. She still able to perform her pyrokinesis ability in this form, and inhumanly strong, agile, and fast, capable to quickly inflict considerable damage on her enemies with her fangs and fiery blasts. 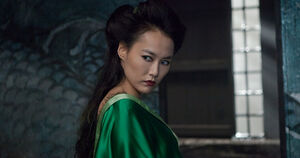 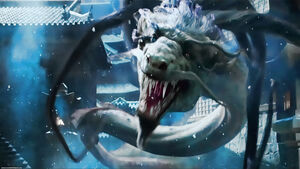 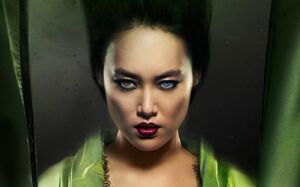 Add a photo to this gallery
Retrieved from "https://villains.fandom.com/wiki/Mizuki_(47_Ronin)?oldid=3550780"
Community content is available under CC-BY-SA unless otherwise noted.