To kill the Ronins, to kill both Kai and Lady Mika Asano, to overthrow Shogun Tokugawa Tsunayoshi and rule all of Japan alongside Lord Kira Yoshinaka.

Mizuki is one of the main villains and the secondary antagonist of the 2013 film 47 Ronin alongside Lord Kira, who made Lord Asano banish him by manipulating him to kill Kira. 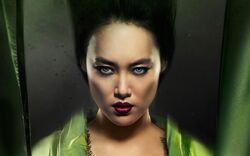 Add a photo to this gallery
Retrieved from "https://villains.fandom.com/wiki/Mizuki_(47_Ronin)?oldid=1502324"
Community content is available under CC-BY-SA unless otherwise noted.