Instructor at the Academy (both formerly)
Rogue ninja

Getting attention and acknowledgement.
Killing, hurting and taunting his enemies.

Get attention and acknowledgement from others.
Become the most powerful ninja ever (all failed).

Mizuki (ミズキ in Japanese) is a minor antagonist in the Naruto manga and anime, serving as a main antagonist of the first episode of the original series, and the titular main antagonist of the Mizuki Tracking Mission Arc. He is a rogue ninja who betrayed the Leaf Village and attempted to steal a secret scroll from Naruto's possession. In the anime, this was in order to give the scroll to Orochimaru.

Mizuki was the best friend of Iruka Umino in his youth, but soon began to grow jealous of him following the attack of the Nine-Tailed Fox. Iruka's parents had died in the attack, and Mizuki noticed that Iruka was suddenly getting more attention from the villagers, causing him to become increasingly jealous. Despite his newfound hatred towards Iruka, Mizuki still pretended to be his best friend, while at the same time relishing in his misery. When Mizuki applied for a teaching position at the academy, the Third Hokage discovered that one of Mizuki's teammates had died of suffocation on a mission, yet had only a minor, non-lethal leg wound. Mizuki was turned down and Iruka instead got the job, causing him to eventually hate the Leaf Village.

As it turns out, Orochimaru himself saw Mizuki murder his teammate, which peaked his interest. He left him with instructions for a potion after giving him a Curse Mark.

After Naruto was the only one not to graduate with the rest of his classmates, Mizuki manipulated him into stealing the Scroll of Seals to improve his skills. He originally planned to kill Naruto and take the scroll for himself, but soon after Iruka showed up, Mizuki revealed Naruto's identity as the Nine-Tailed Fox. After hearing Iruka defend him, Naruto helps him fend off Mizuki, using the Multiple Shadow Clone Jutsu that he learned from the scroll. After Mizuki was beaten into unconsciousness, he was declared a missing-nin and incarcerated in Konoha's maximum security prison. However, his time in prison didn't soothe his hatred towards Naruto and Iruka.

In the anime-exclusive Mizuki Strikes Back arc, it is revealed that he actually intended to give the Scroll of Seals to Orochimaru. He planned to escape from prison with the help of the Legendary Stupid Brothers and create the potion that Orochimaru requested. After his escape, he was bent on getting revenge on both Naruto and Iruka, hating them more than ever. His former lover, Tsubaki, remarked how he used to be kind before he began following Orochimaru, and tried to convince him to abandon his quest for vengeance. He would not listen, however, and knocked her unconscious.

After dueling with Iruka and nearly killing him with paper bombs, Mizuki broke into the Nara laboratory to get the ingredients and fled to cave where he could concoct his potion. The potion activated his curse mark, causing him to increase in strength and speed as well as transform into a tiger-like humanoid. Realizing that they can't win in a fair match, Iruka guides Naruto away from the battlefield, which prompts Mizuki to give chase. Unfortunately for him, Mizuki is led into a field of sealing paper bombs, paralyzing him so that Naruto could hit him with his Rasengan. The side effects of the potion destroyed his cellular structure and left him in a condition where he could never return to the life of a ninja, thus granting Mizuki his comeuppance for his actions.

After his defeat, Tsunade interrogated him on the whereabouts of Orochimaru and Sasuke, but he gave no useful information, as he was not aware that Orochimaru's base in the Hidden Sound Village had been destroyed. After being healed and saved by Tsunade he returned to prison where he presumably spent rest of his life. 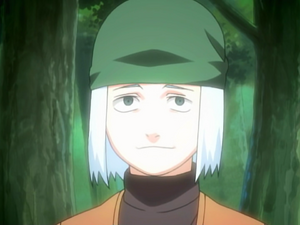 Mizuki as a Child 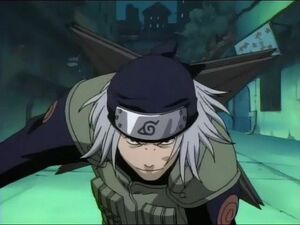 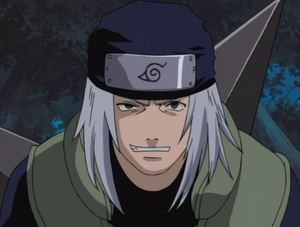 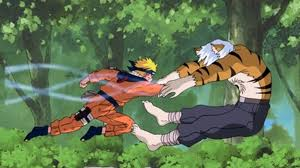 Mizuki being hit by Naruto's Rasengan while in his transformed state. 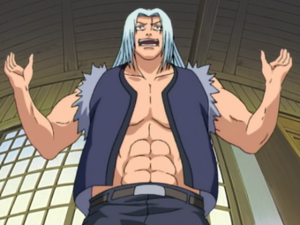 Mizuki after being in the prison. 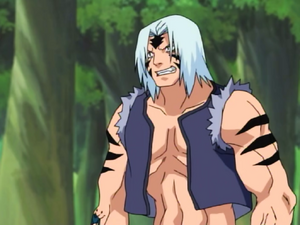