Bring chaos into the world under her rule.

Dark Lady
Mizuki Rashoujin is the main antagonist and final boss of Samurai Shodown II. She is an evil spirit who wants to bring the evil god into our world to plunge it into an eternal doom. Her grudge turned her into a bitter and wicked soul. She lives to make others suffer.

Mizuki was just a little child when her family threw her into the forest, due to their poverty, to reduce the size of the family and thus the expense (a tragic and awful practice prevalent across Northeast Asia in times of impoverishment). Embittered being discarded by her own family, she grew a huge hatred towards them, which ultimately expanded onto all of humanity. As she dies of hunger, her final desire before death was a destruction of humanity that brought her to this point. Ambrodia, the Evil God of Makai, forges a pact with her spirit, turns her into a demon to carry her plans of revenge against the human world.

Since then, she has sent various disasters around the world. In order to use all of her powers, she must exchange her body from time to time. 800 years after she made the pact with Ambrosia, she was challenged by a powerful Shinto priestess named Bizuki, who wanted to cleanse Mizuki's soul. Although she had great powers, Mizuki prevailed, possessing her body in the process. She then went into a hibernation to store power into her new body.

200 years later, she awakens when Shiro Tokisada Amakusa fails with his plan to summon Ambrosia into our world. She then starts her own plan to bring Ambrosia, sending disasters around the world and releasing demons who possess people.

Learning that Amakusa's evil part was killed and his good side was in the loose, Mizuki seals him in a tomb so he would not interfere with her plans. Mizuki steals both the Palenke Stone (which was used by Amakusa previously) and the Tangil Stone for the unholy ritual to summon Ambrosia.

She then sends minions to slay the warriors whose souls were needed to restore the Tangil Stone, and also hires mercenaries to kill anyone she demands. Amakusa manages to break his seal, and goes after the warriors in an attempt to protect them, but Mizuki gets pissed and kills Amakusa.

Having previously defeated Amakusa, Haohmaru was also one of the souls to restore the Tangil Stone, so he challenges Mizuki and defeats Mizuki with the aid of the other warriors (Kyoshiro Senryo, Jubei Yagyu and Neinhalt Sieger), thus stopping her ritual. Her soul is banished forever to the Makai, leaving the body of Bizuki, who is saved by Kyoshiro. 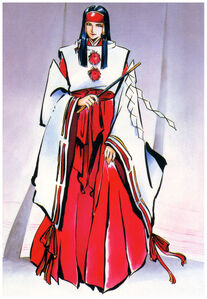 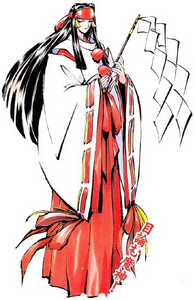 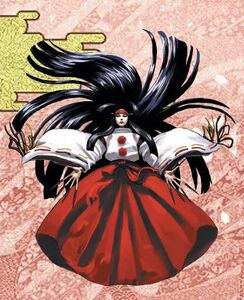 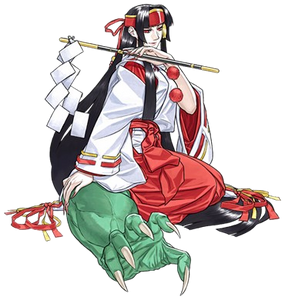 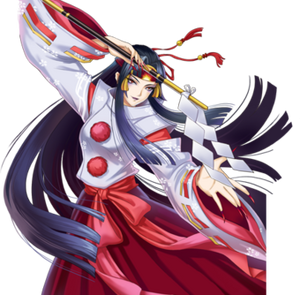 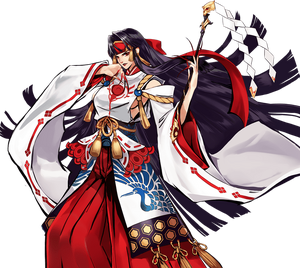 Retrieved from "https://villains.fandom.com/wiki/Mizuki_Rashoujin?oldid=4030109"
Community content is available under CC-BY-SA unless otherwise noted.