Mizzter Blizzard is the boss encountered in World 4 and a minor antagonist in Paper Mario: Sticker Star.

Once his statue form is destroyed, Mizzter Blizzard will reveal his true snow form to start to attack Mario with snowballs which Mario can block. After being defeated, Mizzter Blizzard apologizes to Mario for what he did, revealing that he made a wish to the Sticker Star to not melt and be stable even when spring came. After saying that, Mizzter Blizzard collapses and tells Mario from the sky to make the promise to build him again next winter so they can meet once more. 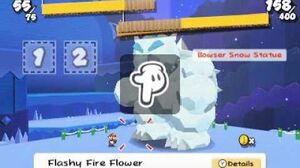