The Mobile-Fortress Destroyer, often shortened to the Destroyer, is a major antagonist from the light novel series Konosuba: God's Blessing on this Wonderful World!, as well as its manga and anime adaptions. It also serves as the main antagonist of Isekai Quartet.

The Destroyer was an ancient and powerful robot hellbent on the destruction of human civilization, which served as a major antagonist towards the beginning of the series. It was eventually defeated and destroyed by the combined efforts of Kazuma's party and Wiz.

The inventor of the Mobile-Fortress Destroyer was a lay-about from Japan, who came under the service of the advanced civilization Norse. Norse wanted the inventor to create an incredibly powerful weapon which could be used against their enemies. The inventor, not wanting to be executed, agreed to build the weapon.

Eventually the Mobile-Fortress Destroyer malfunctioned, and, because the inventor forgot to make an off-switch, was able to destroy the kingdom of Norse in it entirety. After destroying Norse, the Destroyer continued rampaging for centuries, eradicating any civilization that came into its path.

Centuries after destroying Norse, the Mobile-Fortress Destroyer set its sights on the town of Axel, which was the starting point for most adventurers in the kingdom of Belzerg. Unfortunately for the Destroyer, a young adventurer named Satou Kazuma and his party resided in Axel, who came up with a plan to annihilate the Destroyer.

When the Destroyer came into sight of the town, Kazuma's party priest Aqua, unleashed a powerful dispel spell which broke the magical barrier surrounding the Destroyer. With its shield down, the Destroyer was left defenseless against powerful spells.

However, the coronatite was not the only problem for Kazuma and the adventurers of Axel, as the hull of the Destroyer began rising in pressure. As Wiz noted, if the Destroyer's pressure was risen too high and it detonated, it might still destroy Axel. Kazuma was able to quickly come up with a solution, having Megumin use her Explosion magic to obliterate the Destroyer's body before its pressure could rise too high. Fortunately this worked, and the threat of the Destroyer was vanquished by Megumin for good.

The Destroyer makes an appearance in the first season of Isekai Quartet, a crossover anime that Konosuba is a part of. The series features heroes from four different anime shows of the Isekai genre, being

transported to a strange school where they are forced to learn under several teachers from their respective shows.

The Mobile-Fortress Destroyer proved formidable, however the combined efforts of the four shows' main protagonists (including Kazuma), were enough to remove the headband from the Destroyer's head, ending the game. 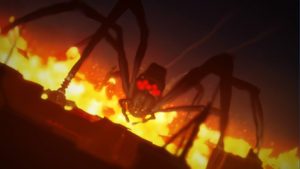 The Destroyer decimates the Kingdom of Norse. 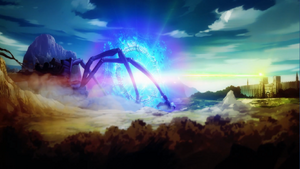 Aqua fires upon the Destroyer's shield. 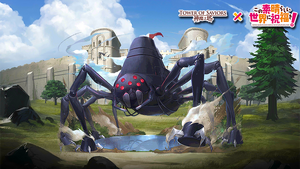 The Destroyer in the Tower of Saviours card game. 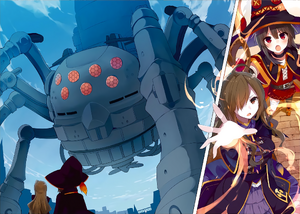 The Mobile-Fortress Destroyer in the Konosuba Light Novel series. 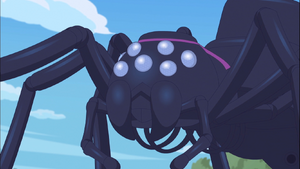 The Destroyer in the crossover anime Isekai Quartet.