Moby Dick is a legendary sea monster and the titular main antagonist of the 1851 classic Herman Melville novel of the same name. Although the beast is destructive, powerful, and wild, multiple interpretations of Moby Dick's character have risen. Some believe him to merely be an animal acting out of sheer instinct, but Captain Ahab and many whalers think of him as a sapient, dangerous, and malevolent supernatural entity.

Moby Dick is a gigantic albino sperm whale and a fearsome monster that Ahab is determined to slay at all costs, in the process, Ahab goes insane and the battle between man and beast becomes what is widely believed to be one of the most famous stories of all time.

Moby Dick is unseen throughout most of the original novel, only appearing during the climactic final three chapters each known as "The Chase". However, the White Whale is mentioned many times over the course of the book, and throughout the story the sailors aboard the Pequod encounter multiple other crews across the ocean who have had their own encounters with Moby Dick. Many of these encounters are grisly and ill-fated in nature, though they don't dissuade Ahab from his monomaniacal quest to kill the White Whale.

Moby Dick's first mention in the book is in Chapter 36. Ahab calls the crew of the Pequod to the deck, and announces that he'll give a doubloon of Spanish gold to whoever on the ship spots a "white-headed whale with a wrinkled brow and crooked jaw". Three of the Pequod's harpooners, Tashtego, Queequeg, and Daggoo, have seen the White Whale in the past, and Tashtego says its name is Moby Dick. Ahab then claims that Moby Dick was the whale that had ripped his leg off during his previous whaling voyage.

Later, the Pequod has a gam (an informal meeting/exchange of information, news, and letters between two passing whaling ships) with a vessel known as the Town-Ho. Ahab asks the crew of the Town-Ho if they have seen Moby Dick, and they tell a story of the White Whale, which is then relayed back to the reader by the narrator, Ishmael. The story is about two of the Town-Ho's sailors, Steelkilt and Radney; Steelkilt is a heroic man, while Radney is haggard and abusive. After Steelkilt is imprisoned on the ship for an attempted mutiny, the Town-Ho spots Moby Dick, and Radney sets out in a boat to kill the whale. Steelkilt is one of the crewmen on Radney's boat, and Radney orders the rowers of the boat to ram into Moby Dick. Radney ends up being thrown from the boat, and lands in the jaws of the White Whale, who sounds back underwater. It is implied he is subsequently devoured, as after Moby Dick rises to the surface again, all that remains of Radney is tattered bits of clothes in the whale's teeth.

The next boat the Pequod meets with a story about Moby Dick is the Jeroboam. One of the crewmen on the boat is a Shaker prophet who claims to be the human incarnation of Archangel Gabriel. "Gabriel" claims that the White Whale is the incarnation of God himself, and prophesizes that Ahab will die if he tries to hunt the whale. The crew of the Jeroboam also says that Moby Dick killed a member of their crew named Macey, who also tried to hunt the whale. The crew claims that Gabriel predicted Macey's death too, and many of them are convinced that his prophecies are accurate.

One of the last mentions of Moby Dick before the whale actually appears is made by Captain Boomer of the Samuel Enderby whaling ship. Like Ahab, Boomer is missing a limb (an arm instead of a leg), and also has a whalebone prosthetic in its place. Ahab asks if Boomer lost his arm to Moby Dick, and Boomer confirms this (more specifically, Boomer injured himself with his harpoon while chasing the whale, and required an amputation). Unlike Ahab, however, Boomer isn't interested in getting revenge on the White Whale. After losing his arm, Boomer spotted Moby Dick twice more, and chose not to chase him out of fear of losing his other arm.

Mere days before the Pequod encounters Moby Dick, they meet a ship named the Rachel. The captain of the Rachel is searching for a lost boat, which went missing while hunting Moby Dick. The whale pulled on the harpoon line after being speared and dragged the boat in tow out to sea. The captain of the Rachel says that his son was on the missing boat, and urges the Pequod to help him search. Ahab coldly refuses him, stating that he cannot afford to waste time in hunting Moby Dick. The final ship the Pequod meets before they find the White Whale is a boat called the Delight, who lost five men trying to kill Moby Dick. Ahab flatly states that he doesn't care about their loss or their story, as he only wants to know if they succeeded in killing Moby Dick. After the crew confirms that Moby Dick is still alive, Ahab resumes his hunt.

When Moby Dick is finally found, Tashtego alerts the crew and claims the doubloon for himself. Ahab disputes this, claiming he saw the White Whale first. Ahab himself, along with the Pequod's mates and harpooners, set out in several boats to chase Moby Dick. On the first day of the chase, Moby-Dick eludes the crew and destroys some of the boats. The crew returns to the Pequod, resolving to resume the chase on the next day.

On the second day of the chase, Ahab loses his harpooner, Fedallah, to Moby Dick. He realizes that Fedallah claimed that he would die before Ahab would die, and that was the first condition that needed to be met before the captain's death. This unsettles Ahab, but he does not surrender. On the third and final day of the chase, Ahab spots Fedallah's drowned and mutilated body tied to the body of the White Whale by the line of a harpoon. Ahab realizes that Moby Dick is the "hearse not made by human hands" that Fedallah said would appear before Ahab's death. Once Moby Dick attacks the Pequod and sinks it, Ahab realizes that the ship was the "hearse made of American wood". Despite this, Ahab is not frightened, since Fedallah's final prophesy was that Ahab would be killed by hemp rope, which Ahab interprets as meaning that he'd be hanged for some kind of crime. He chases Moby Dick, and after a dramatic speech, he throws his harpoon at the whale. However, there is a tangle in the harpoon's hemp rope line, and Ahab's neck is caught in it, strangling the life from his body as he disappears into the sea, attached to Moby Dick.

Ishmael was the only one to survive Moby Dick's attack on the Pequod, staying afloat in Queequeg's kayak-coffin while the rest of the crew drowned. Moby Dick escapes, and it is not stated if it later died from the wounds inflicted by Ahab or not. 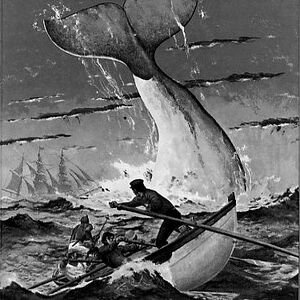 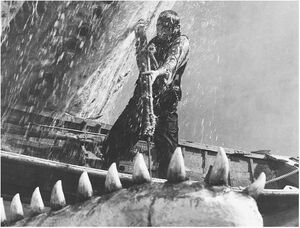 Moby Dick about to eat Ahab in the 1956 film adaptation of Moby Dick. 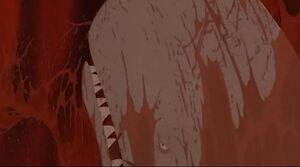 Moby Dick in The Pagemaster. 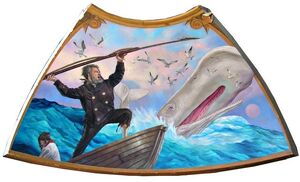 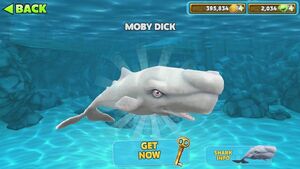 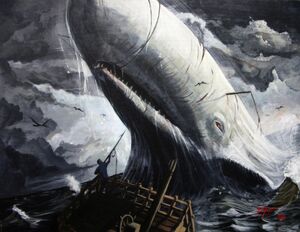 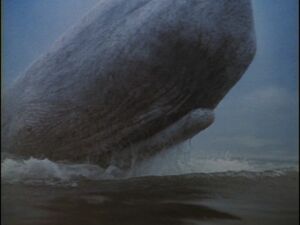 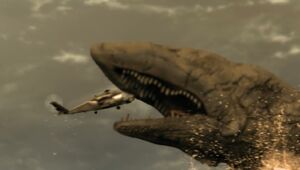