Suck in air
Deadly contact
Hit his head over the wall

Attacking strangers that enter his area.

Dimwit
The Mocking Bird is a villain and boss in Rayman Origins, and one of the four "Kings" that the heroes must defeat. He looks like a gigantic bird and appears in Grumbling Grottos in the level To Bubblize a Mocking Bird. Although he can fly by moving his wings, he also uses his tail as a propeller. 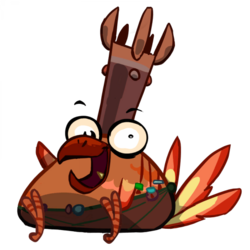