"The God" (by her followers)

Hanging either sacrifice or intruders who are not worthy to be her followers.

Be worshipped by humans who enter her forest.

Moder, or also better known as The Creature, is the main antagonist of Adam Nevill's 2011 British horror novel The Ritual, and its 2017 film adaptation of the same name. She is an obscure Jötunn that inhabits a forest in Northern Sweden and is venerated by an ancient group of cultists.

In the 2017 film adaptation, her vocal sound effects were provided by Luke Gentry.

As described by one of the Swedish cultists, Moder is a "bastard offspring" of the Norse god Loki and is one of the Jötnar, a race of troll/giant-like gods that served as the rivals of Gods of Asgard in Norse mythology. She appears as an enormous, elk-like monster with bright yellow eyes, skeletal head with antlers and a pair of human-like hands on her head. Moder stalks travelers who enter her forest and "marks" the person who has suffered from emotional pain. That person is given a choice; worship Moder or die at hwr hands. Those who are not marked by her are tortured and sacrificed.

After centuries, Moder has created a cult of worshippers, made up of missing people who hiked through the forest surrounding her home. The cultists who worship her are given eternal life and are protected by Moder from outsiders. A group of friends, Phil, Hutch, Luke, and Dom, are hiking in northern Sweden in honor of their friend Rob, who was killed during a store robbery. Hutch converses with Luke and decides to hike through the forest because it is a quicker route back to their lodge. Everyone agrees, and they enter the forest in the early morning.

When the group stops due to Dom injuring his leg, Luke climbs to a clearing to scout out the area and sees Moder hiding behind a tree before she startles him. Dom and Luke get into an argument before they continue. As they camp one evening, Hutch asks Luke to head to the lodge at sunrise while he will stay with Phil and Dom. However, Luke awakens in the night to Moder's footsteps before she abducts Hutch. The friends later find his body in the same manner as the elk; bloody and impaled on a tree. Luke climbs to higher ground and sees that they are near to their lodge; when he returns, Phil is taken by Jötunn and is momentarily found impaled on a tree. Luke and Dom run from the Jötunn and stumble on a village, where they are held hostage by a group of Swedish cultists. One of them reveals that Luke will be offered to join the group, as they are all marked like him, but Dom is sacrificed to Moder, who takes the form of his wife before killing him.

Luke escapes and ignites the barely living elders of the cultist at the attic of the main cottage where he is held to cover his escape. This infuriates Moder who kills the surviving cultists as punishment for their negligence. Luke runs from ber into the forest and is forced on his knees several times, being offered a chance to submit to the Jötunn. But instead, Luke strikes at Moder with an ax and flees until he exits the forest; the Jötunn halts by the forest's boundary, and cannot cross. Luke and Moder exchange roars at each other before the former heads to the lodge.

It's unknown what happened to Moder afterwards, but it can be inferred that the Jötunn had to start all over again in rebuilding her cult.

Moder presented herself as a dark guardian deity of the secluded woodland she held dominion over. The beast Jötunn stalks travelers who dare to trespass her pine forest domain as she singles out those who emotionally troubled among them, marking them and forcing them to confront traumatic moments in their lives in order to easily convert them while executing the rest. Her unforgiving and demanding nature not unlike cruel pagan deities is best shown through her interaction with her cult; she expects periodical sacrifice in return of blessings upon them and slaughters them for transgressions (ex. failure in keeping prisoners in check and preventing the harm upon their half-dead elders) even if said transgressions were done out of sloppiness. Despite this, Moder is not without the capacity to show mercy or compassion as she gives her would-be devotees the chance to pledge upon her in their own volition and protects them in return as long as they won't incur her wrath, only resorting to force them if they show defiance through ill-fated attempt to convert Luke.

Moder is an entity whose appearance fit to that of a Jötunn, the primordial and chaotic giant/troll like deities of Norse Mythology and a child of Loki as stated by one of the cultists. Like Jormungandr and Fenrir, her natural form is animalistic and beast-like instead of humanoid one where in Moder's case, a large elk-like creature with body overgrown with plant matter, spikes protruding along her spine, and an additional set of human-like hands by her hips. Her head resembles a headless human torso with antlers for arms and arms for legs, with a vaguely human head with glowing eyes where its crotch would be.

Moder standing on its hind legs. 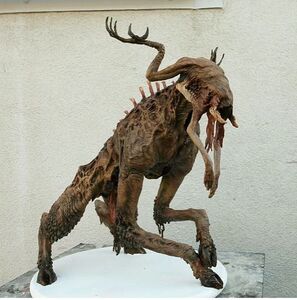 A model of Moder the Jötunn. 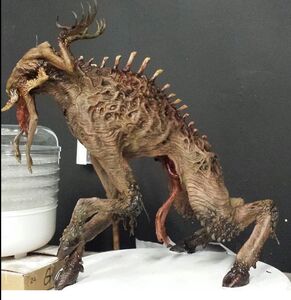