Villains Wiki
Register
Don't have an account?
Sign In
Advertisement
in: Mature, Envious, God Of War Villains,
and 31 more

Impress his father and earn the sacred weapon Mjolnir.

Kill Kratos.
Keep Atreus to himself (all failed).

Modi is the secondary antagonist of God of War. He is one of the sons of Thor and is one of the Æsir. He and his brother Magni were tasked by his grandfather, Odin to help Baldur, their uncle, in order to find Kratos and Atreus.

He is voiced by Nolan North, who also voiced Hades in 2005s God of War, Dr. Edward Richtofen in Call of Duty Zombies, The Penguin in Batman Arkham series, Martin Walker in Spec Ops: The Line, and David in The Last of Us.

Modi first travels with his brother Magni and his uncle Baldur to enlist Mimir's aid in finding Kratos and Atreus. After Mimir promptly refuses to held the three gods, Modi and Magni threaten to return later and steal Mimir's other eye when no one is looking.

Later, Modi and Magni search for Kratos and Atreus near Thamur's corpse, eventually discovering them while the two were trying to obtain a piece of Thamur's chisel. When Magni discovers the two right when they wete about to get Thamur's chisel, Kratos defies Magni's order to surrender. When Kratos tells Atreus to run, the latter is ambushed by Modi, who is amused to see (to him at least) a mere child with a bow threatening him, this leads to a fight breaking out. During the battle, Magni frequently mocks Atreus, especially his recently deceased mother. After a fierce, violent struggle, Kratos manages to overwhelm and kills Magni, prompting Modi to flee in abject terror as Atreus fired arrows at him in rage.

Modi later attempted to defeat Kratos and Atreus at Tyr's Temple by ambush. As he begins electrocuting Kratos, he furiously proclaims that Kratos ruined everything and that he'll only get Mjölnir by default because of Magni's death, showing his inferior complex of living under his much stronger and revered brother's shadow. However, after Atreus falls into a coma because of his attempt to use Spartan's Rage, Modi is quickly overpowered and struck by an enraged Kratos, forcing him to retreat again.

Following this, Modi fled back to Asgard, where Thor blamed him for Magni's death and severely beat him for his cowardice. Later, a bloodied Modi attempted to confront Kratos and Atreus again when the two were inside the mountain, but was too badly injured to do anything. Kratos saw no reason to kill him as he had already been beaten, but after Modi's particularly vulgar insult towards Atreus' mother, Faye, Atreus stabs Modi in the neck and kicks him into the chasm, presumably killing him.

Modi, like most of the Æsir, was a cruel and sadistic individual, threatening Mimir with torture after the God of Knowledge refused to aid in the hunt for Kratos and Atreus.

However, unlike the other Æsir Gods (seen so far), such as Baldur and his brother Magni. Modi was a spineless coward, preferring either opponents weaker than himself, or ambushing them from behind, unlike Magni, who was eager for a challenge.

Modi was extremely obsessed making his father proud of him, more so than his brother, due to being looked down on all his life in favor of his brother's accomplishments. After Magni's death Modi was consumed with the paranoia of being seen as a joke by his fellow Gods prompting him to continue hunting Kratos alone using cowardly tactics just to prove himself to his father. Despite the bitter rivalry however, Modi and Magni were extremely close with one another, as after the latter was slain by Kratos, Modi was overcome with horror and swore vengeance upon him.

Modi was noted as a fool by others, such as the Æsir, Baldur, Mimir, Kratos and Sindri who the latter called him and Magni as Thor's idiot sons, due to relying on brute force than anything else. This was shown when after being brutally beaten and has been called a coward by his own father, Modi still had the gall to threaten Kratos and Atreus despite being completely at their mercy, and continued to insult them, which finally led to his death. 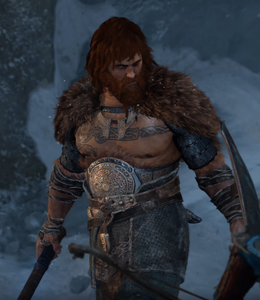 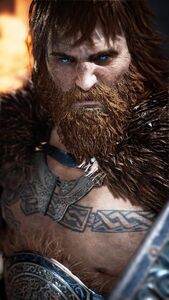 Modi confronting Kratos and Atreus at the mountain, speaking of how his father beat him and called him a coward.

After insulting his mother, Atreus stabs Modi in the neck.

Modi being kicked off the cliff by Atreus, presumably falling to his death.