Reform the Galactic Empire in his image to bring order to the Galaxy (ongoing).

By 9 ABY, five years after the Empire's fall following the Battle of Endor, he claimed the title of Moff and formed his own faction within the Imperial remnants, consisting of mercenaries, former Stormtroopers, former Scout Troopers, former Death Troopers, and Dark Troopers. He works with sophisticated figures of the criminal underworld to acquire a Force-sensitive Child to extract his blood to synthesize and create Force-sensitive clones for the Imperial Army.

He is portrayed by Giancarlo Esposito, who also plays Gustavo Fring in Breaking Bad, Sidney Glass in Once Upon a Time, The Dentist in Payday 2, Stan Edgar in The Boys, and Antón Castillo in Far Cry 6.

Gideon is a sophisticated, knowledgeable commander who sought to bring about order in the wake of the fall of the Galactic Empire. He has built his reputation as an imposing and ruthless man, as various stories have spread among his men, one being that he kills his men simply to make a statement. He is also willing to kill fellow Imperials, in order to achieve his goals.

Gideon is also a tactical strategist and happens to know full well of his opponent's personal background and history. He uses this kind of information to psychologically exploit their weakness and distract them with it.

Gideon led a remnant of Imperial forces. He wished to acquire a valuable asset from Arvala-7, in 9 ABY Gideon tasked a man known as "the Client" and Doctor Pershing with bringing it alive by any means necessary.

Upon contacting the Client on Nevarro, he informed Gideon that they had the Child in their custody. However, the Moff told him to recheck the Child's pram. Soon after, Gideon's Death Troopers opened fire killing the Client and the stormtroopers accompanying him in the cantina once operated by the Bounty Hunter's Guild. Moments later, an Imperial Troop Transport arrived, and Stormtroopers poured out, assisting the Death Troopers in securing the cantina to keep the Mandalorian and his crew from escaping.

Shortly afterward, Gideon arrived at the scene in his Outland TIE Fighter. As he climbed out from his ship and approached the shot up cantina window, the Moff stated to the Mandalorian how he did not understand the Child at all, and how much he needed it. As Gideon was saying this, two scout troopers shot down Kuiil and his Blurrg. They collected the Child, who was lying on the ground and zoomed off to bring it back to him.

When the scout troopers carrying the Child approached the town they sent a radio message requesting clearance. While the operator on the other end was willing to let them proceed he advised them to wait as Gideon had just killed ten of his own men. Checking back for an update on their clearance, the scout troopers learned that Gideon had just killed one of his own officers for interrupting him. Upon hearing Djarin and his crew desperately trying to escape through the vents, Gideon began to speak to the group. Gideon introduced his E-Web turret and described how it had mowed down many of Dune's ranks as well as many Mandalorian recruits at The Night of a Thousand Tears during the Siege of Mandalore. Gideon revealed both their full names in the process—Carasynthia Dune and Din Djarin. Lastly, he called out Karga as a disgraced Magistrate and telling him to lay down his weapon and to come outside.

Karga further asked what assurance he offered, who told Karga that they couldn't trust him. Gideon continued by remarking how Karga broke their earlier arrangement. The Moff stated how he would gladly break any promise he made to them, and would happily watch the former magistrate die, and that that Gideon could offer was that the Moff would act in his self-interest. After he had finished, Gideon left his troopers to watch over the cantina. He turned around to tell Djarin and his crew that they had until nightfall to cooperate. Otherwise, he would order the E-Web to open fire.

After Gideon walked off, IG-11 began a rescue effort, giving Djarin, Karga, and Dune a chance to escape. A battle ensued, and amongst all of the chaos, Gideon watched the battle around him. The Moff eyed Djarin while the Mandalorian utilized the E-Web. Before long, Gideon raised his blaster and shot Djarin in the back of the head. Before Mandalorian could fire back, Gideon took his time to adjust his aim and fire at the E-Web's power pack. It exploded, sending Djarin flying backward. His injuries forced him and the others to fall back into the cantina. Dune dragged Djarin into the cantina while Karga and IG-11 retreated inside. Frustrated with the lack of progress, Gideon ordered an Incinerator Stormtrooper to burn them out. The trooper set the building alight but was overpowered and killed when the Child use the Force to push back the flames.

As Djarin and his team escaped through the Nevarro sewer vents, Gideon sent in more stormtroopers to stop them. When their efforts had failed, Gideon dispatched another platoon to wait at the end of a Underground lava river. Upon anticipating his troops' failure, Gideon hopped into his TIE fighter to deal with Djarin himself. After IG-11 detonated, killing off the entire platoon, Gideon swooped in and began to fire at the Mandalorian and his team. The Moff swerved his TIE back around and met Djarin. The Mandalorian flew up into the air on his new jetpack and grappled onto the back of his TIE fighter. Gideon tried his best to shake him off but was unsuccessful.

After climbing on top of the TIE fighter, Djarin tried to shoot him from the roof of the cockpit, but was protected by the blast-proof glass, allowing the Moff to continue shaking off the Mandalorian. Gideon spun his TIE fighter and darted in multiple directions to lose Djarin, but the latter managed to plant detonators on the TIE. By the time Gideon discovered them, the left-wing blew off, and a fire started inside of the cockpit. After he crashed, the Mandalorian and the rest of his crew assumed he was dead. Djarin parted ways with his comrades and flew off-world with the Child.

After his Outland TIE fighter crashed at the hands of the Mandalorian, Gideon is revealed to have survived the crash by cutting through the wreckage with the Darksaber.

Gideon contacts the Trask Imperial Captain and his Imperial pilots of a Gozanti-class cruiser via hologram as it is being raided by Mando and the Nite Owls, led by Bo-Katan Kryze. With the ship's weapon supplies captured, Gideon commands the Captain to crash the ship into Trask's ocean. The Captain shot both of his pilots and took the controls in order to comply with Gideon's orders out of loyalty to the empire. The Mandalorians fought their way to the cockpit and managed to pull the ship back in time. The Captain committed suicide rather than give up information on Gideon's location.

Gideon is seen on board a Arquitens-class command cruiser, where an imperial comms officer informs him a spy has planted a tracker on the Mandalorian's Razor Crest, and that they will be ready for plans to be seen. Gideon smiles at the news as he stands in a room full of Dark Troopers.

Gideon later tracks down the Razor Quest on the planet Tython and sends down two imperial transports with stormtroopers. After the death of the stormtroopers and the destruction of their transport through the combined work of Djarin, the Bounty Hunter Boba Fett, and the assassin Fennec Shand, Gideon lets the cruiser fire on the Razor Crest, destroying it in one shot. Gideon then sends 4 dark troopers down who capture Grogu and the cruiser jumps into hyperspace. Gideon is later seen watching Grogu in his cell as he uses the force to incapacitate two stormtroopers, then mocks him and threatens him with the Darksaber, before ordering his men to contact Dr. Pershing.

He later receives a message from Din Djarin who tells him he is coming to take back Grogu, in a speech very similar to Gideon's speech when they met first on Nevarro.

Djarin and his allies boarded Gideon's cruiser in order to rescue the child. Despite the presence of Phase Three Dark Troopers, Mando and his allies were able to subdue the crew. However, anticipating their strategy, Gideon took Grogu personally and was confronted by Djarin. At that point, he offers to let him leave with Grogu in exchange for leaving his ship. However, he then tries to attack Djarin while his back is turned, after which they engage in a fierce one-on-one duel. Equipped with a Beskar suit, the only thing the Darksaber can't cut through, and a spear, Djarin eventually disarms and defeats Gideon, then proceeds to capture and take him to the others alive. However, he then tries to stir up conflict by pointing out that by defeating him in combat, the Darksaber now belong to Djarin, which Bo-Katan Kryze was hoping to reclaim for herself to liberate Mandalore, and she refuses to take it even when Djarin offers it to her. At that point, things took a turn for the worse when all the Dark Troopers that Djarin ejected into space earlier fly back onto the ship, at which point Gideon smugly points out that despite their valiant effort, they wouldn't survive against them, and that only he and the child will be left alive.

However, just as it seemed their luck had run out, Luke Skywalker arrived in a lone X-Wing and defeated all the Dark Troopers with little effort. Realizing who the robed figure was slicing through his Dark Troopers with ease, and terrified over the thought of having to face the man who vanquished both Emperor Palpatine and Darth Vader, Gideon tried to kill Grogu, but Djarin kept him from killing the child. Gideon then attempted suicide to avoid having to face Skywalker and being captured, but was knocked out by Cara Dune before he could kill himself.

Following Grogu's rescue, Moff Gideon was taken into custody by the New Republic. Din Djarin believed that sooner or later the New Republic would put Gideon to death for his many crimes.

Appearances on The Mandalorian

Moff Gideon speaking to the Client before killing him.

Moff Gideon with his stormtroopers. 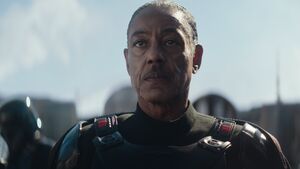 Gideon demanding to be given the Child.

Gideon having survived the crash. 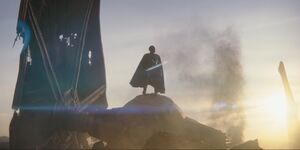 Moff Gideon standing on his TIE fighter while wielding the Darksaber. 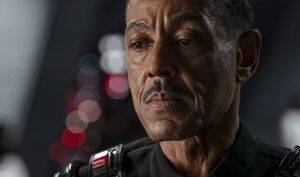 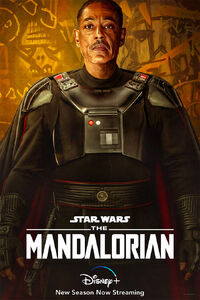 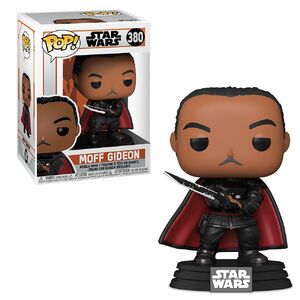 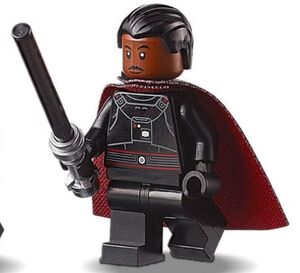 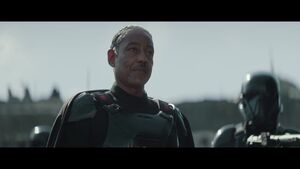