Valuing power and control above all else

Break those who do not bend to Mogus' will with destructive might.

The Mogu (魔古, sometimes referred to as "Mogus" in plural) are major antagonists (along with the Sha and Garrosh Hellscream) in the World of Warcraft Expansion, Mists of Pandaria. They were stone creations created by the Titans to fight the minions of the Old God Y'Shaarj and to guard the sacred Vale of Eternal Blossoms. They were afflicted with the curse of flesh and turned on each other and the lesser races.

The were the original rulers of Pandaria 12,000 years ago and kept the Pandarens as slaves and held a belief that the strongest should rule. They had a no-weapons policy, but the Pandaren mastered the monk class and overthrew the Mogu, and made the Pandaren Empire which would rule peacefully for thousands of years.

By the time of Mists of Pandaria, the Mogu finally return to try and recapture Pandaria. There are different clans of Mogu that are often at war with each other until Xin the Weaponmaster tries to unite them. The Mogu are experts in a magic known as flesh-shaping, enabling them to create new creatures. They also turn flesh into stone and could place souls into statues that were completely loyal to them.

It is eventually revealed they were created by the Titans to help fight against the Old God, Y'Shaarj. When the Titans left Azeroth, the Mogu became their own masters. 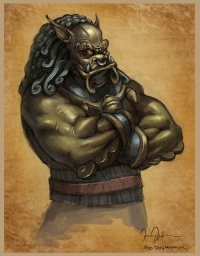