Ability to transform into a confederate motorcycle

Mohawk is a supporting antagonist of the 2017 film Transformers: The Last Knight. He is a Decepticon footsoldier who transforms into a confederate motorcycle. Despite his loyalty, Megatron seems to fail of acknowledging it, most likely due to Mohawk's talkative nature.

He was voiced by Reno Wilson, who also voiced Autobots Mudflap and Sqweeks.

Mohawk was the first Decepticon opted to work with Megatron. The T.R.F. fulfilled Megatron's request by releasing Mohawk out of custody, with him taunting them with death. He later joined with the other Decepticons on their hunt for Cade Yeager.

They were met resistance with Bumblebee, Drift, and Crosshairs. During the fight, Mohawk somehow managed to wandered off from the battle. Unfortunately, he was left behind from his comrades and was later blasted by Bumblebee. Despite this, his decapitated head survived and continued to bemoan his situation. 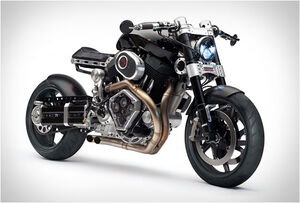 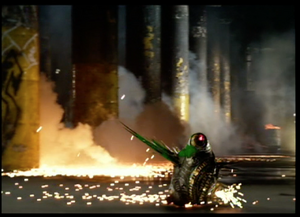 Mohawk being reduced into a head by Bumblebee. 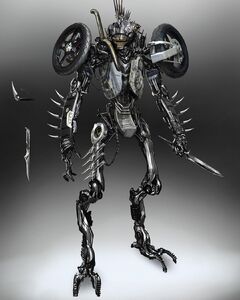 Concept art of an unproduced scene in which Mohawk battle Drift.
Add a photo to this gallery

Retrieved from "https://villains.fandom.com/wiki/Mohawk_(Transformers)?oldid=4166633"
Community content is available under CC-BY-SA unless otherwise noted.