Serve Talon in accomplishing their goals.

Moira O'Deorain, or simply known by her first name Moira, is one of the main antagonists from Overwatch and Overwatch 2. She is one of the council members of Talon and a former member of Blackwatch.

She was voiced by Genevieve O'Reilly.

Moira O'Deorain was once a scientist that worked with Overwatch. She published an article focusing on a methodology for creating custom genetic programs that could alter DNA cells, in order to cure diseases and disorders.

Her work was considered to be highly dangerous among her fellow members, due to its unethical and flagitious nature. Her obsession for the evolution of science was also feared, as some believed that this was one of the few things that caused the Omnic Crisis. As a result, her reputation was damaged greatly.

However, her work caught the attention of Overwatch's black ops division; Blackwatch. From there, she continued her work and experiments. One of her successful experiments were done on Gabriel Reyes. After the disbandment of Overwatch, Moira continued on with her life.

Her work caught the attention of those at Oasis University, where she received an invitation to work as a minister in genetics. Eventually, she joined the terrorist organization, Talon, serving as one of the council members.

Moira is described to be "weirdly self-obsessed more than anything" and has a thirst and hunger for knowledge, She does not care about the outcomes of her scientific decisions. Jeff Kaplan had jokingly described her as "chaotic neutral" which originates from D&D Alignment.

In game, Moira gives an air of superiority. She seems to take either a neutral or positive stance towards Omnics (though this sentiment is shared by fellow Talon member Doomfist to an extent), as she reflects upon London's "medieval" attitudes towards them when she first spawns in King's Row occasionally. She is also shown to be rather cold-hearted and sadistic, as she enjoys consuming life from others. 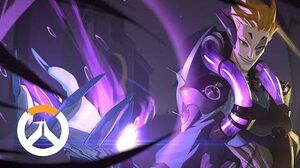