Be reunited with her mother's soul (succeeded).

She is the housekeeper of the Harmon's and ghost of the house. While women see her as a kind old maid, men see her as young and seductive. While her older self is quite friendly, her younger self constantly antagonizes and manipulates Ben Harmon, amongst others.

The young Moira was portrayed by Alexandra Breckenridge, while the older Moira was played by Frances Conroy, who also played Penny Fleck in Joker and Mama Polk and Belle Noir in other American Horror Story seasons.

Moira was originally a housekeeper for Constance Langdon and her husband, Hugo. One day, Moira and Hugo had an affair and when he made advances towards her again, she refused them, saying they had made a mistake. However, he forced himself on her, which Constance walked in on. Angered, Constance shot Moira in the eye and killed Hugo as well. She buried Moira in the backyard, which resulted in her becoming a permanent ghost at the residence. Many years later, Moira became the housekeeper to the Harmon family. While she was able to appear to woman as older, men saw her a young seductress until they were "awakened".

While Moira's older self is kind and gentle, her younger self is much more seductive and manipulative, using her sexuality as a weapon. Perhaps Moira's most villainous deed came when she assisted Larry and Constance in murdering the man who was interested in buying the home. 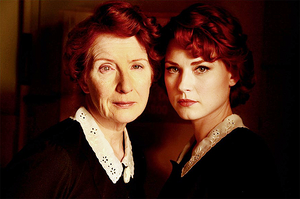