The Mojo Witch Doctor, also called the "Witch Doctor", is an evil the main antagonist of the 1995 Disney platforming videogame Maui Mallard in Cold Shadow (also known as "Donald in Maui Mallard").

In the game, he steals the Shabuhm Shabuhm idol, without which the Muddrake island it belongs to will explode, destroying the isle and it's native inhabitants known as the Muddrakes, and Maui Mallard (Donald Duck) was hired to find it.

After several misadventures, Maui tracks down the Mojo Witch Doctor to the his towering darkened jungle lair, the Mojo Stronghold. Inside lies 4 flying stone platforms with non-magic 3 small green orbs and 4 large magic purple orbs attached to them. And the main platform in the middle has the Mojo Witch Doctor's very own ghastly dark-red throne that has 7 duck skulls with fangs including 5 on the vesica (vesica_piscis)-shaped headstead covered in jungle vines and 2 on the arms.

Maui Mallard in his super-powered ninja garb as Cold Shadow confronts the Mojo Witch Doctor in his Mojo Stronghold, defeats him and recovers the Shabuhm Shabuhm idol. 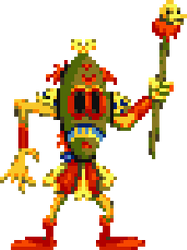 The Mojo Wicth Doctor, aka the Witch Doctor. 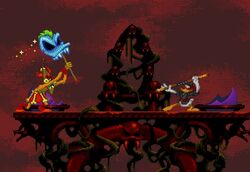 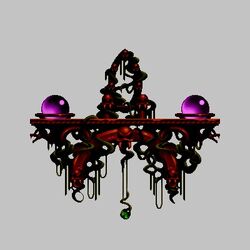 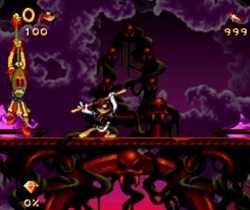 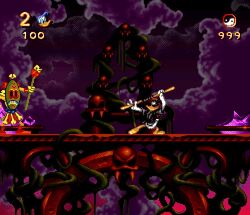 The Mojo Witch Doctor vs. Cold Shadow (Donald Duck).
Add a photo to this gallery
Retrieved from "https://villains.fandom.com/wiki/Mojo_Witch_Doctor?oldid=3542534"
Community content is available under CC-BY-SA unless otherwise noted.