Mok Shaiz's Majordomo is a supporting antagonist-turned-minor character in the 2021 Disney+ live-action Star Wars webseries The Book of Boba Fett. He is a male Twi'lek who serves as the Mayor Mok Shaiz's second in command over Mos Espa.

He was portrayed by David Pasquesi.

The mayor's majordomo is first seen entering Jabba's Palace after Boba Fett became the new daimyo while the leaders of the Mos Espa crime families are paying tribute to Fett. Unlike the others the majordomo has no tribute to give other than the mayor's supposedly heart felt welcome, and then demands Boba Fett pay tribute to the mayor.

Later after being attacked by assassins in the street who said that they were sent by the mayor. Fett, Shand, and his two Gamorrean guards walk through the streets of Mos Espa to go see the mayor with the Night Wind assassin in tow. They ask to see the mayor but his majordomo tells them that the mayor is to busy refusing to let them in. Fett and his entourage enter anyway the majordomo apologizes for the interruption and stands there silently watching as Mok Shaiz and Boba Fett chat.

A few days after Jabba's twin cousins tried to have Fett killed by Black Krrsantan, the Twins traveled to Fett's palace where they told him how the spineless mayor is offering Jabba's Empire to another crime syndicate Boba Fett had already laid claim to it and how the empire was already promised to the Hutt Twins. Not wanting to be part of the chaos the Twins say that they are leaving Tatooine. After receiving the news on the mayor Boba Fett tries having Shand and 8D8 contact the mayor so they can speak but once again he is told the mayor is to busy. So Boba and Shand along with the new gang they recruited went to Mok Shaiz's office.

After a long speeder chase that caused some destruction and damage the gang finally caught the majordomo who crashes. After his crash he tries to start his speeder again but to no avail. Boba, Fennec and his Gamorreans finally catch up with the gang who have the majordomo cornered. Fett asks where the mayor is. Mok Shaiz's majordomo admits that the mayor had left to join the Pyke Syndicate, who are in the process of unloading their forces at the spaceport.

The captured majordomo is taken to the palace and is present for Boba and Fennec’s briefing of their crew, including the Mandalorian and Black Krrsantan. When Fennec mentions that Shaiz has fled Tatooine to avoid the war between Fett and the Pykes, the majordomo snidely chimes in that Shaiz is on a “scheduled vacation”. 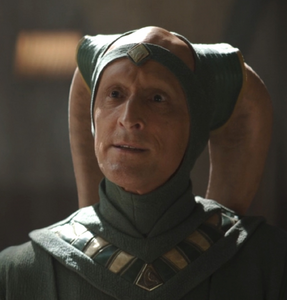 The majordomo in Boba Fett's palace 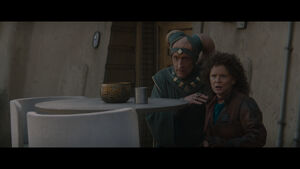 The majordomo with Peli Motto