Leader of the Thuggee

Indiana Jones and the Temple of Doom

High Priest of the Thuggee

Find all Five Sankara Stones and use their power to make the Thuggee unstoppable.

Wipe out the British, the Hebrews, the Muslims and the Christians and have their Gods and religions cast down and forgotten.
Rule the world alongside his Goddess Kali Ma.
Kill Indiana Jones, Willie Scott and Short Round.
Prevent the enslaved children from escaping the Thuggee cult (all failed).

Mola Ram's most famous line as he rips out a Hebrew's heart to sacrifice him to Kali.

The British in India will be slaughtered. Then we will overrun the Muslims. Then the Hebrew God will fall, and then the Christian God will be cast down and forgotten. Soon, Kali Ma will rule the world.Mola Ram explaining his world domination plans.

You don't believe me? You will, Dr. Jones. You will become a true believer.Mola Ram to Dr. Indiana Jones.

Mola Ram is the main antagonist of the 1984 action-adventure film Indiana Jones and the Temple of Doom, the second installment in the Indiana Jones film series.

He was a ruthless Thuggee high priest who made Pankot Palace his lair and wanted to use the five Sankara Stones to set up the reign of Kali, Goddess of Death. To that end, Mola Ram enslaved the children of a village that had one of the Stones (the taking of it bringing his total to three). He forced them to mine for the other two and for gems to fund his cause in catacombs underneath the palace.

He also brainwashed humans, including local politicians and royalty, with the "blood of Kālī Ma" to make them devout followers (unless they are exposed to extreme pain, like burning). Every now and then, he would sacrifice someone to Kali which involved him strapping them to a metal grate and tearing out the victim's heart while lowering them in a pit of fire and enjoying every minute of it.

Mola Ram was a strong, powerful, influential, and authoritative worshiper of the Hindu Goddess of Death, Kali, and was devoted to conquering the world and ruling it in her name. He was also highly devoted to the villainous Thuggee cult that he leads, and wishes to make them, and himself, all-powerful. This devotion to evil forces is only a fraction of his villainous character and throughout the film, he is shown to be exactly that: a cruel, power-hungry, heartless, sadistic, ruthless, psychopathic, and even genocidal man. He enjoys, and is happy to cause, the suffering of others, sacrificing innocents in horrific ways, torturing his enemies and brainwashing them into becoming his subordinates, and even kidnapping innocent children and enslaving them to support his cause, not caring for their mutilation.

Mola Ram is also vile to his own allies, throwing one of them to their death in a crocodile-infested river and chuckling at his death. Mola Ram's ultimate plan is an extremely merciless one, as he is willing to rule the entire world and have his belief be the only one there is, and he is shown to be genocidal, wishing to slaughter the British, other religions and he is straight up willing to kill anyone who stands in his way; henceforth elevating his characterisation as a monster through and through.

Mola Ram was an Indian man, a fanatical worshipper of Kali and one of the Thuggee. After the British supposedly slaughtered the Thuggee, a Thuggee priest hid the last two of the lost Sankara Stones in the catacombs beneath Pankot Palace. Mola Ram then became the high priest and the leader of the Thuggee cult. In Pankot, Mola Ram found a powerful ally in Chattar Lal, the Prime Minister of Pankot Palace.

Ram poisoned Maharajah Premjit Singh, Pankot's ruler, in 1930 and with Lal's help, brainwashed into serving him the heir: Premjit's young son, Zalim. He managed to claim three of the lost Sankara Stones, one of which from an Indian village, and kidnapped all of the children from the said village, enslaving them and using them to find the final two Sankara Stones as well as precious gems. He and the Thuggee wished to become unstoppable, wipe out the British and other religions and out of devotion to Kali, rule the world.

​Indiana Jones and the Temple of Doom

Indiana Jones, Willie Scott and Short Round came across the village that Mola Ram had stolen from and left to rot. The inhabitants there tasked them to go to Pankot Palace and bring the Sankara Stone stolen, as well as the children, back to them. The trio arrived at Pankot Palace, with Indy suspecting it was the centre of activity for the Thuggee, leading to them discovering the Thuggee and Mola Ram in a Thuggee celebration, watching him sacrifice a victim by pulling out his heart and lowering him into a lava pit, and seeing the Thuggee bring out the three Sankara Stones that they had found.

After the Thuggee left the room, Indy claimed the Sankara Stone Mola Ram had stolen, and came across the kidnapped and enslaved children, only to be caught. After Indiana Jones, Short Round and Willie were captured, Indy was brought before Mola Ram.

Mola Ram revealed his goals to Indy and then had him drink the blood of Kali, turning him into one of them, and had Short Round enslaved with the rest of the children. Mola Ram attempted to sacrifice Willie to Kali, and allowed Indy to do it for him. Indy nearly lowered Willie into the Lava Pit below, but Short Round, who had escaped and was free, returned him to his senses with fire, and they saved Willie and fought against the Thuggee. As Indy faced Mola Ram, Mola Ram escaped down a trapdoor. Indy and the others rescued the children, claimed the Sankara Stones and battled numerous Thuggee, with Mola Ram leading the latter. The trio managed to escape the catacombs via a mine cart.

Indiana Jones eventually confronted Mola Ram on a bridge over a nearby gorge, who had captured Willie and Shorty. Indy threatened to drop the Sankara Stones into the river below, but Mola Ram laughed in his face, stating that they would be found, before ordering his men to kill him. Indy cut the rope holding the bridge up, causing most of the Thuggee to fall into the river to be eaten by crocodiles.

Mola Ram held onto the bridge and fought Indy for a while, before Indiana called upon the God, Shiva, to use the Sankara Stones against the evil cleric. Mola Ram was burned by the Stones and then fell into the river, where he was devoured alive by the crocodiles, putting an end to his days as a Thuggee High Priest once and for all. His remaining men would try to avenge him, but the Eleventh Poona Rifles arrive shortly afterwards and shoot them, killing most of them while the survivors run away for their lives, but they were arrested for their crimes.

Despite that Mola Ram's reign of terror was finally brought to an end for good, the British government was unable to provide any evidence of Mola Ram's demise due to his gruesome fate of being devoured by crocodiles left little to no trace of his remains, and even moving to punish anyone who publicly said otherwise, as rumors began to circulate that Mola Ram's body disappeared from the river. However, Singh and the British were pleased that stories surrounding Mola Ram's ghost haunting the ruins of the flooded Temple of Doom kept others away from the area. On the other hand, Chattar Lal was able to escape with some treasure, but the British kept an eye to preclude Lal from establishing another Temple of Doom.

You were caught trying to steal the Sankara Stones.Mola Ram to Indiana Jones.

They dig for the gems to support our cause .They also search for the last two stones.Mola Ram to Indy.

Soon we will have all the five Stones, and the Thuggees will be all powerful!Mola Ram explaining his goals.

Mola Ram after Indiana Jones spits out the Blood of Kali.You dare not do that!

You are in a position unsuitable to give orders!Mola Ram to Indiana Jones.

Drop them, Dr. Jones! They will be found! You won't!Mola Ram to Indy.

Mola Ram was shocked when Indy cuts the rope of the bridgeand it was splitted cut in half.AH! WHAT ARE YOU DOING?! YOU FOOL!

Mola Ram is mostly liked and is often considered to be the best and most iconic Indiana Jones villain in spite of the mixed reception Indiana Jones and the Temple of Doom initially received. UGO ranked Mola Ram as #10 on their "Best 80s Movie Villains" list, stating that Mola Ram is the "biggest badass Indiana Jones ever faced" and that "If you were putting together a team of truly evil dudes, he'd make the list. He's one of the best 80s movie villains, hands down." In his review of the film, Rob Gonsalves called Amrish Puri's performance a "definitive portrait of the higher evil" saying that he "still get chills when Mola Ram moves slowly into frame to face his human sacrifice". However, Jeffrey M. Anderson of Combustible Celluloid called Mola Ram a "silly villain".

Empire called "Amrish Puri's Thuggee leader" "fairly insubstantial". Eye for Film, in their review of the film, stated "Where it does succeed is with Amrish Puri's powerful performance as Mola Ram, ripping still-beating hearts from his victims' chests, an unforgettable screen villain. Puri is more than a match for Harrison Ford as the bold hero, and there are some great scenes between them amid the fairground-style frolics and the seemingly endless fist fights". Screen Junkies ranked Mola Ram as one of the Top 8 Craziest Cult leaders.

WatchPlayRead ranked Mola Ram as #5 on their "Ten Badass Movie Villains You Forgot About" list, saying he "won’t just kill you, he’ll rip your damn heart out!". Ain't It Cool, when responding to Amrish Puri's passing on, praised his performance and character, saying "Puri played Mola Ram with a mad flourish. He always had an insane twinkle in his eye that was almost supernatural. His luring of Indiana Jones to dark cult side is just evil and scary. The man radiated bad vibes in that role. And lets not forget his talent for ripping hearts out of bodies and helping to create the much maligned PG-13 rating" and calling him as Mola Ram a "great supporting character" and a "relish dripping villain" that "most geeks like us" loved. 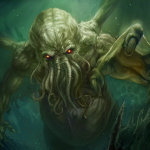