Molded (モールデッド Mōrudeddo) also known as the Mold, are the hostile creatures from Resident Evil 7: Biohazard. These creatures are made by E-001 from both human victims and large quantities of mold, a hyper-evolved fungus. They were created by Mother Miranda and The Connections.

The regular Molded's got three ways of attacking, which are: swinging, biting and jump attacks. Swinging are the lowest attacks which barley create any damage. Biting creates medium damage. While the jump attack makes the most damage, as Molded roars from anger.

If Molded gets knocked down, he would quickly get up. Molded is also capable of creating the counterattacks which depend on the protagonist's actions. Molded's can trigger the counterattacks if Ethan aims at them for a very long time.

If the protagonist makes them flinch or sprint near them. The first counterattacks can be dodged, while the sprint counter is rapidly fast and impossible to actually dodge.

The Molded appear in the basement of the Dulvey House. Molded's will spawn automatically by walking to the Attic Window Key, or by pointing onto the grave with the Dummy Hand. When a lot of damage is made towards the Molded's, lights will activate and Molded will disappear from the video-game.

A variation of a Molded armed with a blade-like appendages possibly caused by a natural mutation. They act similarly to the regular Moldeds, albeit having stronger damage. In their incapacitated form, they can sever the player's leg, causing them to lose their leg and bleed.

In the End of Zoe DLC, a stronger version called the Dual Blade Molded can be encountered, having a pair of blades in each arms, essentially increasing their melee damage.

A Molded that has mutated, causing it to walk on all-fours. It is also called the Four-Legged Molded. Despite its nimble speed, it is more frail than the regular Molded however, it should not be underestimated as its high mobility and speed makes it a force to be reckoned with, combined with its great damage. This variation is first encountered later on in the Processing Area where it will burst through a wall.

Development Code WM-001 or the Mama Molded which is first encountered in the Not a Hero DLC. They are an advanced form of the Fat Molded. Like the Fat Molded, they also attack by vomiting and can also run over the player. They can also summon Little Crawlers (Code: WM-001A") which can latch on the protagonist and explode. The most remarkable feature of the Mama Molded is their regenerative abilities which makes them impervious to firearms. Their only weakness is an Anti-Regen bullets known as the Rapid-acting mycetotoxic rounds (RAMRODs) which impairs their regenerative abilities.

Development Code WM-002, also called the Fumer is an another enemy encountered at the Not a Hero DLC. Their body structure and behavior are similar to that of a regular Molded albeit having white-colored mold. Like the Mama Molded, they are impervious to regular bullets and must be dispatched with RAMRODs. 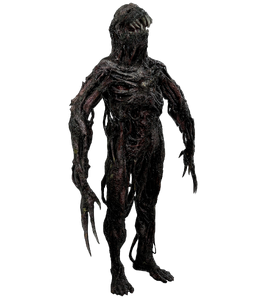 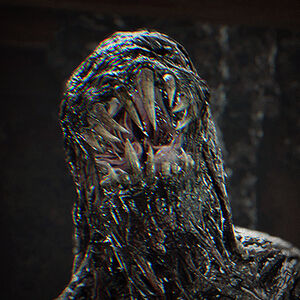 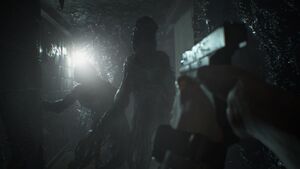 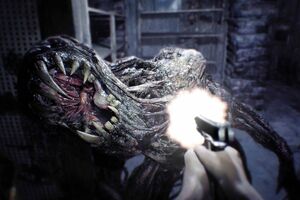 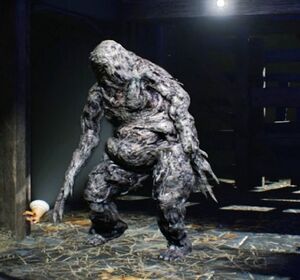 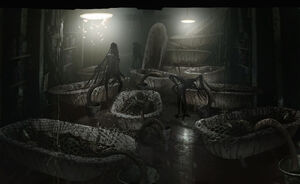 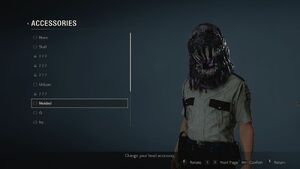