The Meanest Boss in the World

Supreme representative of the Magog Cartel

Business
Wealth
Authority over the RuptureFarms and Magog Cartel

Harvest all the wildlife and make them into food (almost succeeded).

Wealthy Mass Murderer
Molluck is the main antagonist of Oddworld: Abe's Oddysee and its remake, Oddworld: New 'n' Tasty. The boss of bosses, and the supreme representative of the Magog Cartel, Molluck the Glukkon was head of Rupture Farms 1029.

Molluck was completely obsessed with success, the Glukkon way. Single-minded and highly intelligent, he was the head of his class and loyal to the family in every way. He was devoted and a true believer in the pursuit of wealth. No matter how bad things had become, he would pull it out. Even though disaster had struck and his small empire had crumbled, his belief system would not budge. No odd disaster or mishap could bend the determination of such an obsessed and driven individual.

Attractive by Glukkon standards, he walked on his hands like most Executive Class Glukkons, and had awful cigar breath.

Molluck was one of the most powerful Glukkons in Mudos with the rank of Big Cheese. He was the CEO of both Rupture Farms and SoulStorm Brewery. Molluck was praised by his colleagues for his successful business life. When his beloved business began to fall due to the scarcity of Scrabs and Paramites, he decided to turn his attention to the Mudokon slave laborers from his slaughterhouse, Rupture Farms. Eventually, a former Mudokon janitor named Abe managed to shut down RuptureFarms after liberating all 99 of the factory's Mudokon slaves. During Abe's attempt to leave the factory's premises, he was captured by Molluck's henchmen. Molluck met Abe face to face after being captured and planned to watch his gruesome execution which was abruptly canceled when a group of freed Mudokons commenced in a chant that created a storm over RuptureFarms. The storm sent a bolt of a pulse of electricity that surged throughout the factory incapacitating Molluck. Abe was then brought to safety by a Mudokon shaman known as Big Face who teleported into Abe's holding cell to rescue him.

Molluck appeared to have been incinerated when the bolt of electricity (created by the spiritual Mudokons of Monsaic Lines) struck him only moments after sending Abe to his execution. There have been rumors that Molluck survived the lightning strike which incapacitated him and left him with severe burns. Upon awaking from his state of unconsciousness, he fled RuptureFarms and went into hiding. The Magog Cartel allegedly found Molluck alive and plan to have him put on trial. If found guilty by Lady Margaret, he will be shot for his inability to contain a Mudokon uprising and for the loss of two highly profitable Glukkon companies.

After a long absence, Molluck reappears in this remastered version of Abe's Oddysee. Although he serves the same role as the original game, one new cutscene was added in which he witnesses Abe's escape from Rupture Farms via security footage.

Molluck is set to appear in Oddworld: Soulstorm; a retelling of Abe's Exoddus and direct sequel to New 'n' Tasty.

Molluck is a manipulative and heartless psychopath who will manipulate and stab people in the back without a single qualm.

Unlike other Glukkons in the second game, Molluck is taken very seriously, and is an extremely dangerous and competent enemy. Molluck is also a very calm, levelheaded and resourceful businessman, rarely losing his cool. Greedily motivated to earn money any way he can, he slaughters all the wildlife he can get his greedy mitts onto, and doesn't think twice about killing the sentient Mudokons as well. Slaughter and genocide are all second nature to Molluck. This vile and deadly big bad, however, comes to a comical defeat, as it is revealed he is actually a scrawny weakling under his suit, symbolizing the fact his power is nothing more than an illusion. Without a trusty Slig at his side, he is utterly helpless. 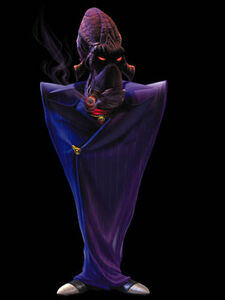 Retrieved from "https://villains.fandom.com/wiki/Molluck?oldid=3487587"
Community content is available under CC-BY-SA unless otherwise noted.