Steal all of the Sparkle Water (failed).

King Brigadier Mollusque-Lancuer III, or simply known as Molluesque-Lancuer, is the villainous king of the Gushens and the boss of the Seaside Kingdom of Super Mario Odyssey. He makes his first appearance in the kingdom's intro.

Mollosque-Lanceur is a large purple octopus with six cyan blue tentacles, yellow eyes, and golden orange hair: consisting of eyebrows, a mustache, and hair around the waste of his head. He wears a primrose chapeau on his bald head, which he later ditches to protect his head with lava, as well as a white robe with a silver amulet. His design makes him similar to the Astro-Lanceur, who also uses his shell-spit attack.

The Bubblainians of Bubblaine can enjoy their lives in the carbonated water of the Seaside Kingdom thanks to it being mixed with beverage from a large goblet called the Glass Tower, granting fortune, happiness, and romance to those who drink it, thus earning the name "Sparkle Water". When Bowser and his minions arrived, they charged Mollusque-Lancuer and his army of Gushens to drain all of the Sparkle Water from the Kingdom, driving the Bubblainians away from the once again carbon infested water. Mollusque-Lancuer himself sits on top of the Glass Tower to drink away at the Sparkle Water gushing from the tip of the giant chalice using a long bendy straw, while all exterior fountains are blocked with large corks.

When Mario arrives, he must find Ground Pound switches in the kingdom that control the four exterior fountains loaded with corks. Mario has to collect the Power Stars in order to unlock the Ground Pound Switches on his way. Hitting each switch pops out the cork from each fountain straight at Mollusque-Lancuer's head. Following the first cork shot, Mollusque-Lancuer grows a lava puddle on his head and spits explosive spiked shells into the water so as to stop Mario, getting faster as more corks are launched at him. Once the final cork strikes Mollusque-Lancuer, he falls from the Glass Tower to confront the plumber.

Mollusque-Lancuer hovers above the water and shoots out more explosive spike shells or drill-like cone shells at Mario out of his mouth. So as to defeat him, Mario must use Cappy to capture a Gushen in the area, using its water jet to rise in the air above Mollusque-Lancuer and rinse the lava from his head. From there, Mario can either continue using the Gushen or ground-pound Mollusque-Lancuer's head, although Mollusque-Lancuer can spin away to escape Mario's attacks. Upon his defeat, Mollusque-Lancuer's head swells up and explodes, sending Mario and a Multi Moon to the top of the Glass Tower. With the octopus tyrant gone and the Sparkle Water back to normal, peace returns to the Seaside Kingdom.

In the Mushroom Kingdom rematch, the battle takes place in the sky instead of the sea, with only a small starting area with a Gushen and a floating Glass Tower as the only pieces of ground. Mario must remain hovering in the air at all times to battle Mollusque-Lancuer, since trying to ground-pound his head can cause Mario to fall to his doom in the void, but because it is raining, the Gushen's water supply always remains filled. 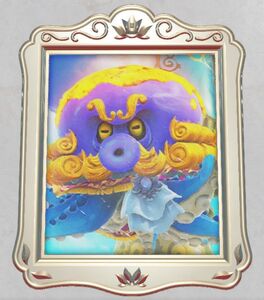 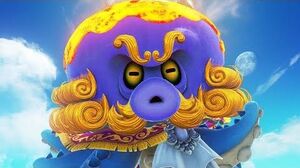 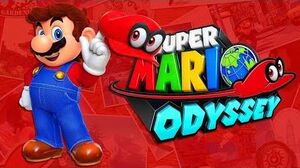