Ability to cause and prevent disasters

Forcing humans to sacrifice their children

Force humanity to worship him (succeeded at first, failed later)

Moloch is a minor antagonist in the SCP mythos. He is directly based on the mythological Moloch and he is responsible for SCP-089.

Moloch was an old god worshipped in multiple ancient societies, such as Canaan and Daevon. At some point he fell into service to the Scarlet King and helped him in his assault on the multiverse. During the conquest he would often work with Jeser. Moloch would bring forth shame in the souls of mortals whilst Jeser warped them to his will.

After the Daevites were defeated by Ab-Leshal, Moloch came forth to fight him. He was easily defeated but survived, although severely weakened.

A statue of Moloch, designated SCP-089, is under the SCP Foundation's observation. At infrequent time the statue speaks, predicting various great catastrophes. If this occurs, the Foundation are to locate a mother with an infant child under six and convince her to place the child in SCP-089 and burn it alive. When this is done will affect how severe the disaster is. For example it took the Foundation six years to carry out the necessary sacrifice during the Taiping Rebellion, leading to the deaths of millions followed by a famine. 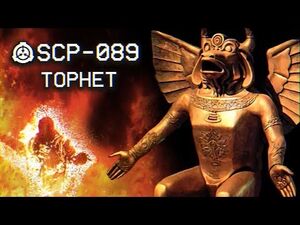