Sleeping in the depths of Freddy Fazbear's Pizza Place.

He is the successor to Ennard after Baby was evicted from the amalgamation following Five Nights at Freddy's: Sister Location. Now lead by Funtime Freddy, it lurks the streets as a "happy family" of animatronic minds intent on killing any nearby humans. He is eventually lured into Freddy Fazbear's Pizza Place by Henry Emily and attempts to kill his former host Michael Afton there.

After Henry burns down the pizzeria, Molten Freddy and his creator William Afton remain the sole survivors of the blaze, with the former absorbing numerous past animatronics into his body to become the ferocious Blob as it now attacks any intruders of the pizzeria's ruins that aren't fellow animatronics.

He is voiced by Kellen Goff, who also voice Funtime Freddy, Fredbear, Freddy Fazbear, and the Daycare Attendant in the rest of the franchise, as well as other villains such as Kai Chisaki, Fiddlesticks, Hans, Diavolo, Rekka Hoshimiya, Zagred, and Techno Pirate.

Molten Freddy is a large tangle of the various wire endoskeletons of the Funtime Animatronics, particularly Funtime Freddy, Ballora, and Funtime Foxy, with the eyes of the animatronics poking out from the amalgamation's body. Funtime Freddy helms the form, meaning that he wears a shattered bear-shaped mask with a brown muzzle, a bloodied jaw with sharp teeth, and a single orange eye, as well as a brown top hat and a red bow tie.

As the Blob, it is now a massive combination of many previous animatronics from Fazbear Entertainment's past, particularly containing the exoskeletons of Bonnie the Bunny, Chica the Chicken, Mangle, and Circus Baby, as well as the Puppet's now-tearless mask and numerous unidentified endoskeletons. Funtime Freddy still serves as its "face" and has reclaimed his mask from Sister Location, though it's dirty and weathered at this point. Furthermore, Funtime Freddy, Bonnie, Chica, Mangle, and a one-eyed endoskeleton all have glowing red eyes, implying their are still possessed by ghosts.

Following the events of Five Nights at Freddy's: Sister Location, in which Ennard had inhabited the corpse of Michael Afton to escape Circus Baby's Entertainment & Rental, Michael's corpse had decomposed significantly, forcing Ennard to evacuate it and escape into the sewers. During this period of time, the other Funtime Animatronics had gotten frustrated with Circus Baby, the amalgamation's controller, bossing them around. Eventually, they kicked her out of Ennard, leading to her creating her own exoskeleton and becoming Scrap Baby.

Ennard, meanwhile, was now under the control of Funtime Freddy, who renamed it to "Molten Freddy". Obtaining a metal bear mask, he continued to lurk the streets for a few years until he rested in the back alley of Freddy Fazbear's Pizza Place. Michael, who had somehow survived his death, worked as the pizzeria's manager and collected Freddy on his first day on the job, running salvage tests on him before storing him in the pizzeria, later along with Baby, Scraptrap and Lefty. Due to his homicidal programming, Freddy lurked throughout the pizzeria's vents in search of child customers to kill, even attempting to kill Michael, but to no avail.

On Michael's last day on the job, the pizzeria's creator, Henry Emily set it on fire, killing himself, Michael, Baby, Lefty, and presumably Ballora and Funtime Foxy within the amalgamation. However, Scraptrap and Freddy survived, with the latter becoming entangled with what ever animatronic was in proximity, gaining a more repaired but still withered Funtime Freddy mask for their head, while being littered with dozens of other empty shells being placed in no logical position, and transforming into a hideous mass of burn metal and writhig wires. Now named the Blob, it rested in a sinkhole above the new base of Scraptrap (now named Burntrap), presumably attacking and killing any humans who came down there.

Eventually, Freddy Fazbear's Mega PizzaPlex was built over the pizzeria's ruins, where Buntrap's fanatic, Vanny, continued his killing spree. One of her attempted victims, Gregory, escaped her grasp and teamed up with the PizzaPlex's main animatronic, Glamrock Freddy to uncover its mysteries. The duo found Freddy Fazbear's Pizza Place's ruins, with Gregory hiding in Glamrock Freddy to avoid the Blob's wrath.

Later, during the duo's battle with Burntrap, the Blob's tentacles protrude from the vents within the office, attempting to grab and kill Gregory. Ultimately, at the end of the battle, the burning pizzeria starts to collapse. Burntrap enters the office in a last-ditch effort to kill the duo, only for the Blob to inexplicably drop into his chamber and drag him away to buy them time to escape. The current whereabouts of the Blob are unknown.

With Funtime Freddy as it's prevailing personality, Molten Freddy is still the sadistic and bloodthirsty beast he was in the past, intent on continuing his programming of killing children. He has become far more unhinged after Sister Location, glitching as he speaks and focusing on the topics of "family" and parties". Although he is mostly docile towards him in his salvage (at least if he is shocked enough), he eventually becomes hostile to Michael, hunting him down in the vents of Freddy Fazbear's Pizza Place. Although Ballora and Funtime Foxy are still present, they are overshadowed by Freddy's presence and never show themselves, with Freddy being in control all the time.

After his incineration and transformation into the Blob, Freddy has essentially lost his mind and been reduced to an animal. Only "speaking" in mechanical breathing and roars, he has now become aggressive to any humans it sees, instantly killing them upon entering his vicinity. However, he still apparently retains some amount of intelligence, since he can tell the difference between certain entities and whether he should attack them or not (eg he attacks Gregory on his own, but not when he's inside Glamrock Freddy). He also attacks the emerging Burntrap, although it's unknown if this is out of his aggressiveness or recognizing him as William Afton. 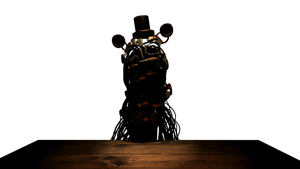 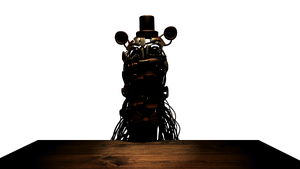 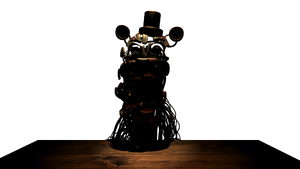 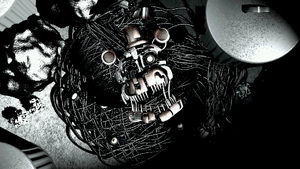 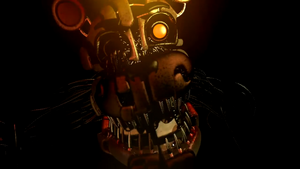 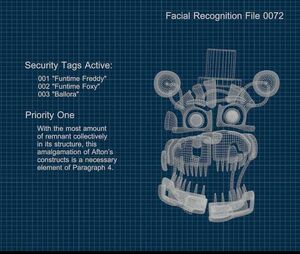 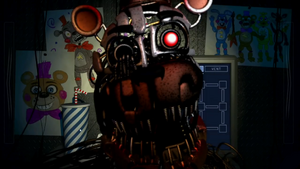 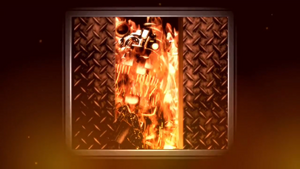 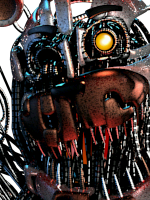 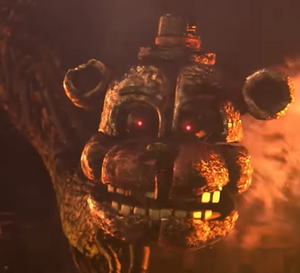