Wicked Witch of the North

The Marvelous Land of Oz

Maintain her rule over Gillikin country.

Prevent Orin and Cheeriobed from reuniting.
Keep Tip unaware of his true identity.
Reclaim her power (all failed).

Abusive Witch
Mombi is an antagonist from The Wizard of Oz books by L. Frank Baum.

She is a wicked old witch who lives in the Gillikin Country of the Land of Oz and had once conquered and ruled the Gillikin Country as the Wicked Witch of the North, only to be deposed by the Good Witch of the North. She enchanted Princess Ozma and remained her guardian after being deposed, in order to prevent her from ascending to the throne. Transformations were Mombi's forte.

She was portrayed by Fiona Shaw in Emerald City who also played Marnie Stonebrook in True Blood, Lena in the 1993 film Super Mario Bros, Father in the 1998 film The Avengers, Ramona Linscott in The Black Dahlia and Carolyn Martens in Killing Eve, and Petunia Dursley in the Harry Potter fillms.

Mombi herself enslaved King Pastoria, the last King to rule Oz, prior to the Wizard's arrival.

Over twenty-five years ago, Mombi, despite her extreme age, came to desire the young and handsome Prince Cheeriobed upon catching sight of him. Driven by her obsession, Mombi kidnapped Cheeriobed's fiancee, Princess Orin, erased her memory and turned her into an old lady to remove her rival to the Prince. With Orin gone, Mombi then approached Cheeriobed and gave her marriage proposal; offering not only rule of Gillikin, but eventually rule over all of Oz.

When Cheeriobed refused to marry the evil witch who had taken his true love away, Mombi made Cheeriobed's father disappear and sent the sea serpent, Quiberon, to plague his lands.

She lived on a farmland which included corn fields, a four-horned cow, and some pigs.

After arriving in Oz, the Wizard of Oz made three visits to Mombi, and handed King Pastoria's baby daughter, Princess Ozma, over to the old witch. Mombi kept the infant heir to the throne successfully hidden away, transforming her into a boy named Tip. Having been the jailor of Ozma's father and grandfather before, Mombi treated Tip as a slave too, as "he" grew up. Nvertheless Mombi was less abusive then normally out of fear of the Wizard Of Oz's wrath.

One day Mombi visited a Crooked Wizard and purchased the Powder of Life from him, which she used to bring Jack Pumpkinhead to life. Tip had created Jack in order to scare her, so as punishment Mombi began brewing a potion that would turn the boy into a marble statue. That night, Tip ran away, taking Jack with him.

When General Jinjur's Army of Revolt conquered the Emerald City, Jinjur feared that the deposed Scarecrow would return with the Tin Woodman to take back the throne of the kingdom. She asked Mombi for help and the old witch agreed, planning to recapture Tip, who had joined the deposed king of Oz.

After leaving the Gillikin Country to join forces with General Jinjur (the self-appointed new Queen of Oz), Mombi was no longer under the jurisdiction of the Good Witch of the North, but the unscrupulous old witch was forced to reckon with Glinda (who wanted to restore Princess Ozma to the throne). The wicked old witch tried to trick and escape Glinda with a series of transformations ranging from the maid Jellia Jamb, to a rose, and ultimately a Griffin, but the Good Sorceress was too clever, slick and resourceful. Glinda turned out to be an even tougher adversary than the Good Witch of the North, and ensured that Mombi could never harm anyone again.

Just before being disenchanted, Tip promised to provide for Mombi in her old age, despite the witch's fiendish actions. After forcing her to disenchant Princess Ozma, Glinda made Mombi drink a powerful draught that stripped the old witch of all her magic powers.

In Ruth Plumly Thompson's The Lost King of Oz, Mombi now a mere cook plots to get power again by finding the lost Pastoria, the King of Oz whom she had enchanted into the form of goose and using him as a puppet to rule Oz. Mombi's plans to control Pastoria and Oz are ultimately foiled. As a result of her attempt to usurp Ozma, Dorothy suggests that Mombi be put out with a pail of water for her misdeeds, and Princess Ozma herself commands it.

L. Frank Baum never suggested that water could destroy all witches, but Thompson certainly surmised as much. Moreover, Baum's original Dorothy and Ozma would never have had anyone executed; Dorothy was unwilling to kill the Wicked Witch of the West even for the sake of seeing Aunt Em and Uncle Henry in Baum's The Wonderful Wizard of Oz, while Ozma was unwilling to destroy her enemies even when they were on the verge of conquering her entire land in Baum's The Emerald City of Oz. Above all, the events in Thompson's book directly contradict Baum's specification that Mombi would be provided for by Ozma herself in her old age.

The later Oz writer March Laumer reversed her death, regenerating and reforming the witch into a harmless character in the non-canonical A Farewell to Oz. David Tai, in Oziana 2008, did similar in "Executive Decisions" where it was retconned that Mombi was splashed with the water of oblivion, forcing her to forget her life as a witch; the only remainders of her previous life being her name and remembering Ozma was once her ward, though altered to believe she was a kindly old lady who loved children.

In the animated movie Journey Back to Oz, Mombi is the cousin of the Wicked Witches of the East and West and the Jester. Mombi was very upset with Dorothy for destroying her cousin, the Witch of the West and help Scarecrow became king of Oz. She plans to avenge her cousins deaths, by finishing what they started: conquer Oz. She takes over the Emerald City with an army of green elephants, conjured out of her magic cauldron. She was voiced by Ethel Merman, and sang two solos titled "An Elephant Never Forgets" and "If You're Gonna Be a Witch (Be a Witch!)" in Merman's trademark brash style.

There's been debate that Madame Morrible from Wicked is in fact Mombi. People have pointed out that both Mombi and Madame Morrible are close associates of the wizard, have knowledge in sorcery and that Shiz University in Maguire's Oz is on the exact location of Shiz, the school that Morrible runs in Maguire's novel. It would also appear that Dr. Nikidik, a character who both appears in The Marvelous Land of Oz as well as Wicked seems to have similar relations with both Mombi and Madame Morrible. In The Marvelous Land of Oz he appears to swap magical secrets with Mombi in Gillikin Country, and he is a working professor assumed to be in league with Madame Morrible in Wicked.

However, Mombi actually exists as her own character in Wicked, where she is known as La Mombey Impeccata. She was King Pastorius' advisor and, as in the original books, was given ownership of his daughter by the Wizard once he overthrew the regent, proceeding to turn her into the kitchen boy called Tip. In Out of Oz, it is revealed that she became the new Emminence of Munchkinland. She puts Dorothy Gale on trial for the death of Nessarose Thropp, as a distraction for her plan of conquering the Emerald City, and forcibly conscripts animals into her army. At the end of the novel, she is imprisoned after the return of Princess Ozma, an unintended consequence of her casting the spell to "call the lost forward". 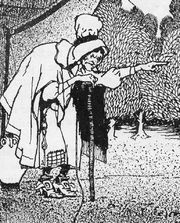 An illustration of Mombi in the original book. 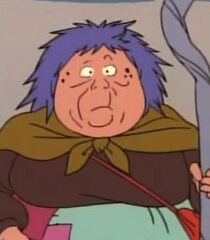 Mombi as seen in The Wonderful Wizard of Oz. 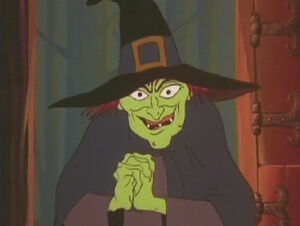 Mombi as seen in Journey Back to Oz. 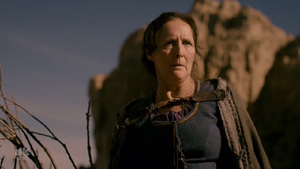 Mombi as seen in Emerald City.