Mombi is a a villainess from The Wizard of Oz books by L. Frank Baum.

Mombi herself enslaved King Pastoria, the last King to rule Oz, prior to the Wizard's arrival. (Dorothy and the Wizard in Oz)

She lived on a farmland which included corn fields, a four-horned cow, and some pigs. (The Marvelous Land of Oz)

After arriving in Oz, the Wizard of Oz made three visits to Mombi, and handed King Pastoria's baby daughter, Princess Ozma, over to the old witch. Mombi kept the infant heir to the throne successfully hidden away, transforming her into a boy named Tip. Having been the jailor of Ozma's father and grandfather before, Mombi treated Tip as a slave too, as "he" grew up.

One day Mombi visited a Crooked Wizard and purchased the Powder of Life from him, which she used to bring Jack Pumpkinhead to life. Tip had created Jack in order to scare her, so as punishment Mombi began brewing a potion that would turn the boy into a marble statue. That night, Tip ran away, taking Jack with him.

When General Jinjur's Army of Revolt conquered the Emerald City, Jinjur feared that the deposed Scarecrow would return with the Tin Woodman to take back the throne of the kingdom. She asked Mombi for help and the old witch agreed, planning to recapture Tip, who had joined the deposed king of Oz.

After leaving the Gillikin Country to join forces with General Jinjur (the self-appointed new Queen of Oz), Mombi was no longer under the jurisdiction of the Good Witch of the North, but the unscrupulous old witch was forced to reckon with Glinda (who wanted to restore Princess Ozma to the throne). The wicked old witch tried to trick and escape Glinda with a series of transformations ranging from the maid Jellia Jamb, to a rose, and ultimately a Griffin, but the Good Sorceress was too clever, slick and resourceful. Glinda turned out to be an even tougher adversary than the Good Witch of the North, and ensured that Mombi could never harm anyone again.

Just before being disenchanted, Tip promised to provide for Mombi in her old age, despite the witch's fiendish actions. After forcing her to disenchant Princess Ozma, Glinda made Mombi drink a powerful draught that stripped the old witch of all her magic powers. (The Marvelous Land of Oz)

In Ruth Plumly Thompson's The Lost King of Oz, Dorothy suggests that Mombi be put out with a pail of water for her misdeeds, and Princess Ozma herself commands it. L. Frank Baum never suggested that water could destroy all witches, but Thompson certainly surmised as much. Moreover, Baum's original Dorothy and Ozma would never have had anyone executed; Dorothy was unwilling to kill the Wicked Witch of the West even for the sake of seeing Aunt Em and Uncle Henry in Baum's The Wonderful Wizard of Oz, while Ozma was unwilling to destroy her enemies even when they were on the verge of conquering her entire land in Baum's The Emerald City of Oz. Above all, the events in Thompson's book directly contradict Baum's specification that Mombi would be provided for by Ozma herself in her old age.

The later Oz writer March Laumer reversed her death, regenerating and reforming the witch into a harmless character in the non-canonical A Farewell to Oz.

The 1985 Disney movie Return to Oz changes the character's name to Princess Mombi portraying her as dark-haired, deranged and evil middle-aged sorceress who commands the maniacal Wheelers, and she is also the secondary antagonist alongside the Nome King who attacked and took over the Emerald City of Oz. She was portrayed by Jean Marsh (as well as Sophie Ward and Fiona Victory), the same actress who plays Head Nurse Wilson in the mental hospital where Dorothy is committed at the beginning of the movie and Queen Bavmorda in 1988 fantasy film Willow. She is a coward at heart who grovels before the Nome King and begs for her life when he is displeased with her. She is also frightened by Jack Pumpkinhead when she first sees him. She makes a deal with the Nome King, for if she trapped Princess Ozma in her enchanted mirror, he would make her the queen of Oz and gives her thirty beautiful heads which she could switch depending on her mood. He also gives her the Emerald City as her own kingdom, after he took away the emeralds. She also guards the Powder of Life. When Dorothy encounters "Princess Mombi" in her palace, Mombi develops a fondness for Dorothy's head and locks her in the tower, planning to remove her head and take it once the girl has reached adulthood. Dorothy however escapes and steals the Powder of Life from a case which also contains Mombi's true head. Unfortunately, she awakens the head which screams Dorothy's name, awakening the other heads in turn which all begin screaming her name as well, ultimately awakening Mombi's headless body which pursues Dorothy who manages to escape. Donning her true head, Mombi sends her sinister minions, the Wheelers after Dorothy. At the climax of the film, the Nome King imprisons Mombi in a magical cage for failing him. When the Nome king is destroyed Mombi is stripped of all her magical powers (rather than Glinda taking them away in the original story). When Princess Ozma is freed from her prison she forgives Mombi because she feels the loss of her powers (none of which we ever actually see) is punishment enough.

In the animated movie Journey Back to Oz, Mombi is the cousin of the Wicked Witches of the East and West. She takes over the Emerald City with an army of green elephants, conjured out of her magic cauldron. She was voiced by Ethel Merman, and sang 2 solos titled "An Elephant Never Forgets" and "If You're Gonna Be a Witch (Be a Witch!)" in Merman's trademark brash style.

There's been debate that Madame Morrible from Wicked is in fact Mombi. People have pointed out that both Mombi and Madame Morrible are close associates of the wizard, have knowledge in sorcery and that Shiz university in Maguire's Oz is on the exact location of Shiz, the school that Morrible runs in Maguire's novel. It would also appear that Dr. Nikidik, a character who both appears in The Marvelous Land of Oz as well as Wicked seems to have similar relations with both Mombi and Madame Morrible. In The Marvelous Land of Oz he appears to swap magical secrets with Mombi in Gillikin Country, and he is a working professor assumed to be in league with Madame Morrible in Wicked. 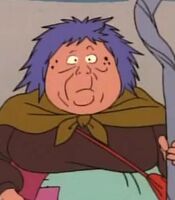 As seen in The Wonderful Wizard of Oz. 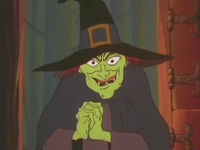 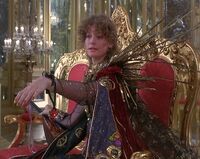 Princess Mombi using one of her fake heads to disguise herself as a young, beautiful woman 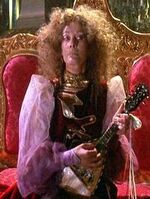 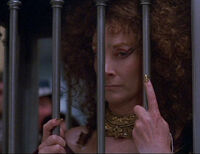 Princess Mombi imprisoned
Add a photo to this gallery

Retrieved from "https://villains.fandom.com/wiki/Mombi?oldid=1823264"
Community content is available under CC-BY-SA unless otherwise noted.