Head of the Midnight Carnival

Make her mark in the world (semi-successful).

Mommy Fortuna is a major antagonist in the 1968 fantasy novel The Last Unicorn by Peter S. Beagle, and its 1982 animated film adaptation of the same name.

In the film, she was voiced by Angela Lansbury, who also portrayed Mrs. Iselin in The Manchurian Candidate.

The Unicorn encounters Mommy Fortuna while resting during her journey. Fortuna has manages to capture one other mythical creature for her show; the Harpy Celaeno. Mommy Fortuna is a witch who uses her illusory magic to run the Midnight Carnival, which showcases mythical creatures that are, in truth, just normal animals disguised by her spells. However, her magic only works on weak-minded people who believe whatever comes easiest. Her other victims include a snake made to seem like one aspect of Jörmungandr, a lion she disguises as a Manticore, a monkey she makes appear as a Minotaur, and even a spider she has people convinced is Arachne, the woman transformed into a spider for her need to show-off her weaving beauty. The spider it-self has been part of the illusion for so long she believes the ethereally beautiful and detailed web tapestries she makes are real and she really is Arachne. In the film's version magic has slowly been ebbing out of the world thus normal humans ability to rationalize has faded and they can not see a unicorn's horn anymore, so Mommy Fortuna uses her magic to give the unicorn a second, fake horn that the masses can see. Mommy Fortuna herself appears as the climax of her own show, disguised as Elli, the spirit of old age. She tells the unicorn she intends to keep her there and safe as a side-show attractions, and that she should be thanking her for keeping her safe from King Haggard and his Red Bull, who hunt unicorns.

Mommy Fortuna's servant Schmendrick is a magician who knows real magic, but is bad at accessing it so he preforms minor stage-tricks instead to entertain crowds while trying to better his technique. As a real magician, Schmendrik is keen enough to pick-up on the unicorn being real and converse with it. Unhappy with his employment Schmendrick agrees to help free the unicorn for a chance to travel with her. When the Unicorn is freed by Schmendrick, she frees the imprisoned animals including the spider, who is heart-broken her webs were never really as beautiful as they seemed with Mommy Fortuna's glamor on her. As the unicorn approaches Celaeno's cage Schmendrick tells her not to free the Harpy and that Celaeno will surely kill her but despite this the Unicorn feels a kinship with the Harpy as one of the last genuinely magical creatures in the world and frees her. Though Celaeno initially attacks the unicorn as part of it's malevolent nature it eventually gives up as the unicorn continues to evade her, instead focusing on Mommy Fortuna when she appears again. Mommy Fortuna allows Celaeno to kill her, shouting triumphantly "You never could have freed yourselves alone! I held you!"  The Harpy kills her, along with her henchman, Ruhk. Though the unicorn and Schmendrick escape, the unicorn notes she can hear faint weeping and that a spider crying is an indescribably sad sound.

Her magic is weak, and works best with ignorant people. She is just barely powerful enough to contain two real magical creatures, but as Schmendrick says, "The truth melts her magic, always." In addition to her magical abilities, Mommy Fortuna is a decent show-woman who knows how to delight/horrify crowds. While the unicorn's first impression is she only knows how to create minor glamors, Mommy Fortuna states she knows real witchery and demonstrates it by subduing Celaeno. As Celaeno is immortal the energy Mommy Fortuna drains from her is only temporary, however the strain on Mommy Fortuna to do it is real.

Mommy Fortuna takes great pride in her show. Her desire to perform is part of a desire to live on in spirit after her death, either as a performer or as an antagonist her mythical creatures will never forget - thus living on through others. She is elated at the prospect of seeing the Unicorn and Harpy captive, excited by the prospect of making her mark on them. Mommy Fortuna has a reverence for both the Unicorn and the Harpy, but shows it by delighting in their unhappiness. Faced with her own death, she is ecstatic, seemingly long having accepted it as an inevitability and just happy when it finally came it was at the hands of a mythic beast who she had imprinted herself on.

Mommy Fortuna as she appears in the movie version. 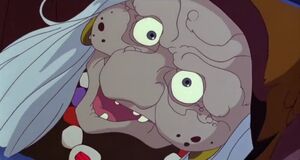 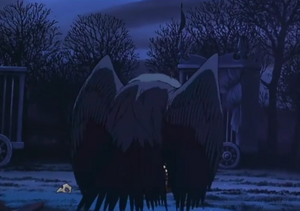 Mommy Fortuna being eaten.
Add a photo to this gallery

Retrieved from "https://villains.fandom.com/wiki/Mommy_Fortuna?oldid=4171327"
Community content is available under CC-BY-SA unless otherwise noted.