While having no true voice, her vocal samples are voiced by Monica Franco.

Little is known about her past, except that she was a pop star and met Daddy Dearest at some point, marrying him and having a daughter with him. During the events of Week 4, Mommy Mearest challenges her daughter's boyfriend to a singing battle in the songs "Satin Panties", "High" and "M.I.L.F", but loses.

In Week 5, she and her husband hold the local "mall Santa" hostage so they can have another stand-off against the Boyfriend, together. However, they disappear in the final song as the Monster becomes the antagonist. Before the events of Week 7, she and her husband created a plot to kill the Boyfriend by sending him and their daughter on a "vacation" while sending the assassin Pico after him.

However, that plan fails when the duo accidentally falls out of the plane they were in into the Tankman's battlefield.

Mommy Mearest shares similar design traits to that of her husband, such as her purple skin, black eyes with gleaming red pupils, a present smile across her face, and a black jacket over her clothing.

However, Mommy Mearest's design also has traits of her own that help make her stand out compared to Daddy Dearest, such as her long, brown hair heading into various sharp ends, a short red dress covered tightly on her body, golden jewelry present on her ears, neck, and arms, red lipstick and nails, a garter belt stretching down her legs, and large black high-heel boots.

During Week 5, she wears an outfit themed around that of Santa Claus, with the standard red coat with white trim and an opening in the chest, red pants, and a black belt with a gold buckle. Despite this, she also adds her own touches to the outfit, such as her high-heels having fur on them and her keeping her earrings. 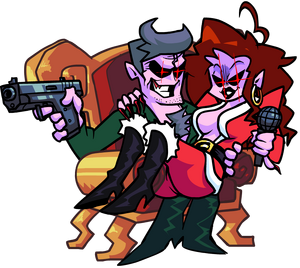 Mommy Mearest with her husband in Week 5.