There were speculations that she was created by either of this two makeup Instagram users: barbierena or nanaakooo. She was actually created by the Japanese company named Link Factory.

The story of Momo started spreading on July 14th, 2018, when a YouTube user GloomyHouse created a video talking about the legend. He goes on to say that there are different phone numbers which you can use to contact Momo on Whatsapp. 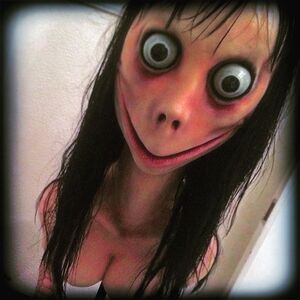 Retrieved from "https://villains.fandom.com/wiki/Momo?oldid=2694122"
Community content is available under CC-BY-SA unless otherwise noted.