To get revenge on the Liars (formerly).

Mona is revealed to be the first and original "A" in both the television and book series, and was anonymously stalking and blackmailing the Liars until her identity was revealed in the Season 2 finale in the TV series. It is also revealed that Mona is responsible for the death of Bethany Young, as she bludgeoned her to unconsciousness (thinking she was Alison DiLaurentis), leading to Melissa Hastings burying her alive, killing her. In the book series, she falls to her death after her reveal, however in the television series, she survives and continues being "A" before eventually becoming an anti-hero.

She was also revealed in season 7 as the identity of Charlotte DiLaurentis's killer, whom she killed in self-defense.

She was portrayed by Janel Parrish.

Mona was a very intelligent girl who desired to be friends with the main characters and Alison. They shunned her, leading Mona to seek to revenge on the girls. Mona found Alison's diary which contained many of their secrets. She even befriended Hanna to put her scheme into action. Along with Hanna she became one of the most popular girls in school. Mona then adopted the identity of "A" which she used to blackmail the girls. They thought it was Alison at first but after her body was found they were baffled. Mona then started becoming more vicious in her actions such as outing Emily to her conservative parents, framing Spencer for Alison's death, burglarizing the Liars homes, and threatening to harm Dr. Sullivan's son, forcing her to flee the city.

Mona eventually made a mistake when she texted Hanna using her own phone instead of the one she bought for her plans. This caused Hanna to realize she was "A". To prevent her from telling the other girls, Mona ran Hanna over with her car. Hanna had temporary memory loss but Mona knew there was a chance Hanna could regain her memories. Mona then sent herself text messages from "A" to throw suspicion off of her. Mona later left a note saying that Melissa had killed Alison, and Spencer and Mona got in a car to go tell the police. Hanna regained her memory and texted Spencer warning her of the danger, leading Mona to realize they figured out she was behind the harassment. Mona then drove past the police station into a deserted area of Rosewood where Mona told Spencer she was "A" explaining she did it because she had been shunned by the girls so she wanted revenge on them. Another part of it was because she had seen them accidentally blind Jenna with a firework.

Spencer accused Mona of murdering Alison, but Mona dropped the bomb that Alison was more likely killed by Ian, using Alison's last diary entry before her murder (in which Ali reveals she was on her way to blackmail Ian about his relationship with Melissa) as evidence to support her claim. Mona explained that she had initially planned to frame Spencer for Alison's murder, but after seeing how much they had in common, decided to frame Melissa instead as a "favor" to her. Mona offered Spencer the chance to become "A" with her, saying she should tell Hanna that she must be misremembering and together they can instead pin the blame for Alison's murder, and the crimes committed by "A" on someone else.

Mona's role in the television series is very similar to the books until the end of Season 2. Instead of dying from her fall off the cliff, she ended up being locked up in an insane asylum. In the psych ward, Mona is sadistically unrepentant and satisfied that the Liars will feel safe with "A" incarcerated, as they don't know she was part of a conspiracy, and that a false sense of security is exactly what "they" want.

Mona was visited by somebody in a red coat. Mona told them she had did everything that they asked her to. Hanna started visiting Mona in the asylum but her Mona showed no signs of recognition at first before Hanna gave her a make-over. The next time Hanna visited her, Mona asked about the new A and later Caleb visited Mona warning her to not mess with Hanna. Later, Mona managed to sneak out of the asylum dressed as a nurse where met up with another member of the A team revealed to be Toby.

Mona told him she was disappointed that their plans had not worked out. During Halloween, Mona snuck out of the asylum again and wore the same costume as Caleb. This fooled Hanna until she saw the mask on that Mona made to her her identity. She apparently made her way back to the asylum pretending to be asleep when a nurse checked on her.

When she returns to school, the student body is aware that she is a psychopath, and avoid her. However, she plays the victim and succeeds in winning them back, although the Liars are still wary of her because someone tried to hit Lucas with a car after he cut ties with Mona, likely someone working for Mona, if not Mona herself. (This person was later revealed to be Toby.) Mona also causes Meredith Sorenson to be harmed in an explosion, and makes it appear as though the Liars were responsible.

To torment Spencer into joining the A-Team, Mona steals her spot as captain of the decathlon team, as a spot was open on the team because one of the members was injured in a bike crash, because Mona tampered with his bicycle. She also has Toby fake his death, driving Spencer further insane, and she agrees to become A, as she had refused before. However, Mona sides with the Liars in the Season 3 finale after she is almost killed in a fire because of Red Coat.

Mona returns to her conniving ways in Season 5 when she begins building an army to prevent Alison's return to Rosewood. When this fails, she fakes her death and frames Alison for murdering her. However, while she was "dead," Charlotte DiLaurentis kidnaps her and holds her hostage in a doll-house. Mona later escapes with the help of the Liars, and shortly afterwards kills Charlotte, supposedly out of self-defense. She also reveals that she killed Bethany years earlier. She spends the remainder of the season avoiding Uber A's attempts to avenge Charlotte's death.

After Hanna tells Mona about the Liars' Lament, Mona becomes obsessed with it and steals it from The Liars. However, A.D. steals it back, triggering a psychotic break in which she dresses up like her original, "nerdy" self. During this time, she reveals that she killed Charlotte, causing the game to shut down. She is taken to Welby State Psychiatric Facility, where Wren Kingston appears in her cell, and Mona believes he us there to kill her. Somehow, Wren fails to do so, and A.D. murders him with a pipe.

When Mona is released from Welby, she kidnaps Spencer in a manner alluding to when she did in Season 2. Mona takes her to the bunker where she learns that A.D./Uber A is her (Spencer's) twin sister Alex Drake. Mona later double-crosses Alex by calling the police on her, who take both Alex and Mary into custody.

In Mona's final appearance, she is seen in France, dating the police officer who arrested Alex and Mary. She goes into her basement where she is seen holding Mary and Alex in a dollhouse-themed cell, implying that Mona is still very demented, and intends to keep them there forever.

Mona is taken to the psych ward. 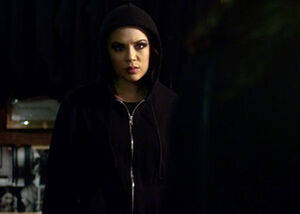 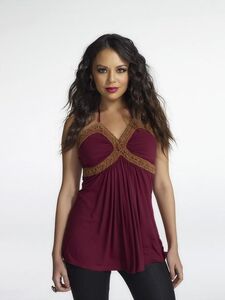 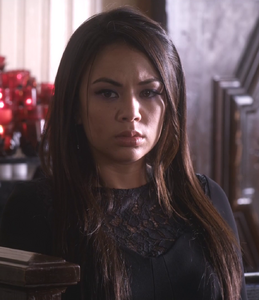 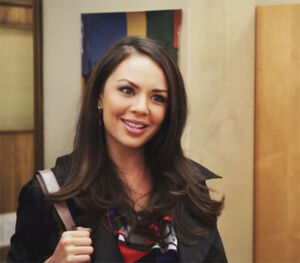 Mona before her reveal as "A" 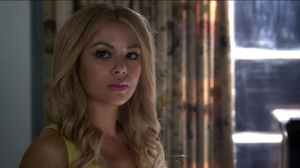 Mona in the Dollhouse. 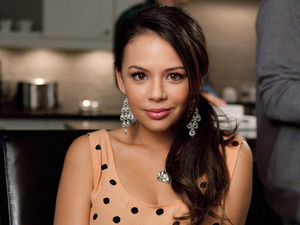 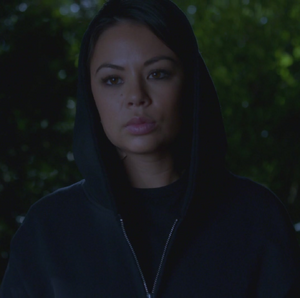 Mona works for Uber A. 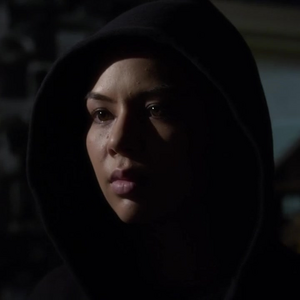